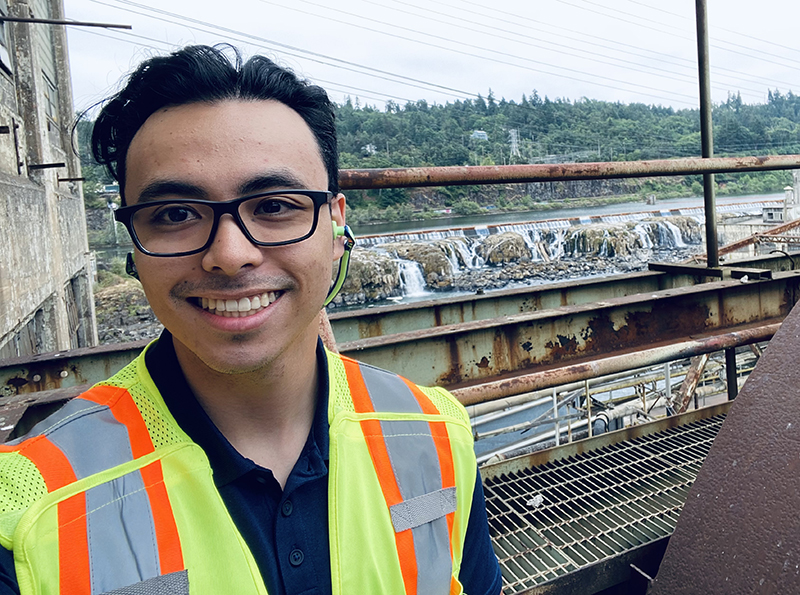 The projects Jason recommended have the potential to save the company $173,000 annually for diverting small plastic particles contained in dewatering sludge from the landfill to agricultural application. An additional $333,000 could be saved annually by introducing upgraded cleaners that could remove 56,210 pounds of plastics. The cost to implement is unknown but it would be primarily labor costs.

Willamette Falls Paper Company is a non-integrated mill that utilizes three paper machines to produce both coated and uncoated grades of paper for both printing and packaging applications. The mill produces nearly 100,000 tons of paper annually, with the final products presented in the form of large rolls four feet in diameter. While the mill’s main focus is on traditional paper-making, it is also a leader in the utilization of non-traditional fiber sources such as pulp from wheat straw.

Boiler Efficiency Project: Steam generated through two natural gas boilers plays a crucial role in the paper-making process at the facility and natural gas usage generates NOx and CO emissions. Efficiently running boilers are a high priority for the Willamette Falls Paper Company’s (WFPC) so they can minimize NOx and CO emissions which are regulated air contaminants.

Jason planned to experiment with various boiler operating parameters such as the flow of the natural gas and air being fed into the boiler, the strength of the burners, and the number of burners operating at a single point. Before the experiments began, the intern spent several weeks assessing detailed efficiency calculations that were conducted with real-time data analytics. Jason found that the boiler was already operating at maximum efficiency; the assessment is estimated to save WFPC up to $20,000 in engineering overhead and salaries by eliminating the need for future resources.

Plastic Contamination Project: WFPC utilizes recycled paper fibers from post-industrial waste to produce paper products, however, large amounts of plastic contaminants are in the incoming bales. Jason identified six key sampling locations around the mill and created a material balance of the recycling process. He recommended to WFPC that the dewatered sludge, containing less than 0.01% of plastics, be diverted from the landfill and sold for fertilizer.

Plastics Prevention Project: Jason expanded on WFPC’s staff ideas to install upgraded cleaners and recommended monitoring and continue to conduct removal efficiency tests. One real is lost to plastics per week. Jason recommended that further research be put into screening plastics at the main mill effluent basin and in understanding the impacts of fully opening the main mill effluent valve to the clarifier. The last recommendation is for WFPC to research the possibility of using the waste removed from the recycled paper fiber bales as fuel for cement production, as seen in other states.