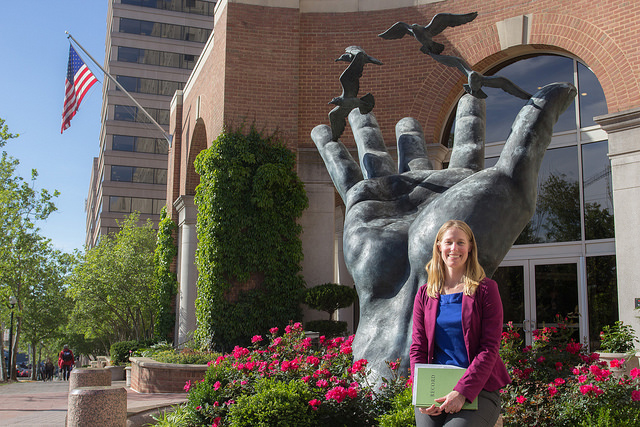 Along with our 50th anniversary, Sea Grant programs around the country are celebrating the 40th anniversary of the John A. Knauss Marine Policy Fellowships, a highly selective program which places scores of budding marine science professionals from all over the country in U.S. executive and legislative offices in the nation's capital for an intensive year of science and policy skill-building.

Named after former NOAA Administrator, John A. Knauss, the fellowships offer a year of hard work and insight into the workings of the federal government that has launched many participants into careers of public policy, public service, and science in the interest of the public and the planet.

More than 1,100 fellows have taken part in the program since 1979, three dozen of them sponsored by Oregon Sea Grant. Many have gone on to exemplary careers in ocean and coastal science, policy-making, teaching and non-profit environmental education. One of them - Shelby Walker, Knauss class of 2006 - now serves as Oregon Sea Grant's director.

Over the past year, one of our own scholars, Eva Lipiec - herself now in Washington D.C. as a member of the Knauss Class of 2016 - tracked down most of our Knauss alumni to find out what they're up to. She found them in almost every U.S. coastal and Great Lakes state, as well as Europe, Africa, Asia and Australia. These former fellows are conducting research, teaching, in leadership positions with government, tribal and non-profit organizations, practicing law and leading companies developing high-tech solutions to environmental problems.

Below are some former Knauss Fellows from the last decade who came from Oregon and the positions they have gone on to hold.