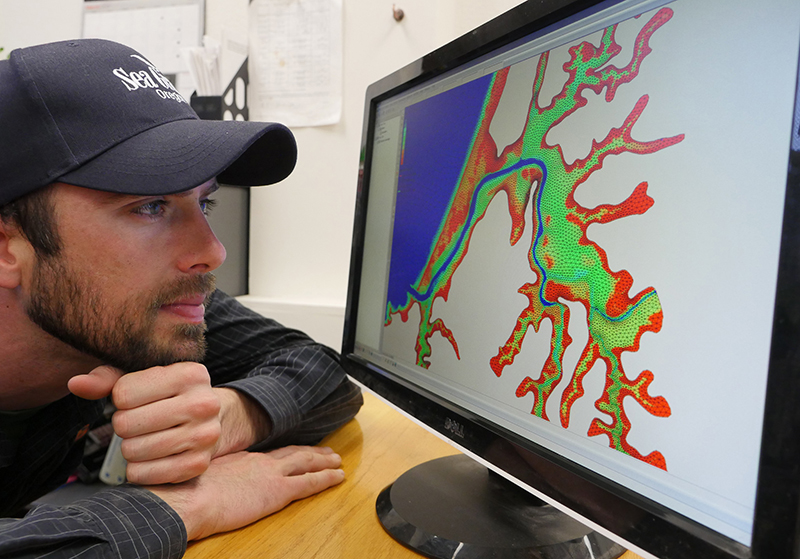 An Oregon Sea Grant scholar is helping to develop computer models to predict how rising sea levels – caused by climate change – will affect estuaries in Tillamook and Coos bays.

"Since small estuaries are strongly coupled to their watersheds, signs of climate change will show up most quickly in these systems," said Kai Parker, who is a 2015–16 Robert E. Malouf Fellow funded by Oregon Sea Grant. "If we can find ways to more accurately predict what those changes might be, we'll have a better chance of being prepared."

Parker, who is a doctoral candidate in coastal and ocean engineering in Oregon State University's College of Engineering, said it's difficult to gain traction with stakeholders over the problem of climate change because of its nebulous nature. His research makes an effort to replace this undefined risk with something actionable that can be used by community planners.

"In this way," he said, "I believe my research and Sea Grant's base ethic of public service are aligned, as my work is specifically designed to create usable products for Pacific Northwest communities."

Among those potentially usable products are flood risk maps developed through numerical modeling that examines estuaries as they change through time, driven by the predicted future climate. The current practice for this type of study, Parker said, is to use the "bathtub model," in which one simply raises the water level by the predicted amount of sea-level rise. However, he pointed out, this model ignores other effects of climate change such as precipitation, wind and waves, resulting in oversimplified predictions.

The solution? Expanding this paradigm through something called a coupled framework continual hydrodynamic model run, which captures the many ways in which climate change might affect an estuary. Parker's results show that wave climates, streamflows, local and distant weather and even tides combine to create an incredibly complex pattern of change. For communities and ecosystems, this means that the effects of climate change are not uniform, but can be locally concentrated or mitigated by the various interacting components.

Parker and his advisor, professor David Hill in OSU's College of Engineering, have attended several stakeholder meetings regarding coastal hazards and local community planning to present their research and get feedback about what products might be most useful.

Parker added that while he has by no means solved the question of how climate change will affect small estuaries, he hopes someday his research will provide a viable tool to help make coastal communities and ecosystems more resilient to its effects.