CORVALLIS, Ore. – An internship program is providing companies in Oregon with ideas for how they can help the environment and their bottom line.

Launched in 2017, the Oregon Applied Sustainability Experience program is organized by Oregon Sea Grant and the Oregon Department of Environmental Quality (DEQ). Current and recent college students in Oregon receive a $5,000 stipend from the Environmental Protection Agency and are matched with businesses to help them conserve water and energy, keep waste out of landfills and waterways, and save money.

The interns spend their summers up to their elbows in spreadsheets, crunching numbers and calculating carbon emissions and energy savings. They interview employees, study the lifecycles of products, and tour manufacturing and processing facilities. At the end of 10 weeks, they offer recommendations for ways to reduce pollution, and they tally up what that could mean for the environment and the companies’ pocketbooks. 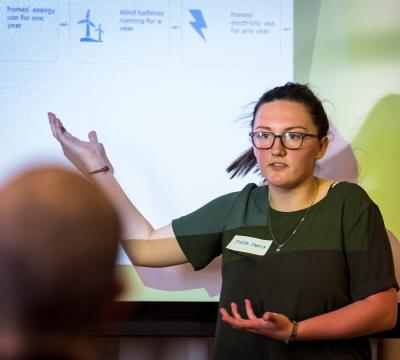 The first cohort interned at five companies in Portland, Eugene, Albany, Hermiston and West Linn. If those businesses were to implement the interns’ recommendations, each year they could save nearly $900,000, reduce water use by 60 million gallons, and decrease solid or hazardous materials by 8.5 tons, said Lisa Cox, a toxics reduction analyst at the DEQ.

One of those companies is Widmer Brothers Brewing, which implemented its intern’s recommendations for preventing expensive-to-treat byproducts from the brewing process from going down the drain. With help from Alan Haynes, who graduated from Oregon State University’s School of Chemical, Biological and Environmental Engineering in 2018, the brewery has reduced total suspended solids in its wastewater by over 60 percent and saved more than $150,000 a year. As a result, it won an award from the National Pollution Prevention Roundtable in 2018.

Last summer, eight interns were selected from a pool of about 60 applicants. Here’s a snapshot of what they accomplished:

Jake Price, an environmental engineering student at OSU, interned at Boeing’s Portland operations. He located a company that may be able to recycle the facility’s nonhazardous dust from sandblasted glass beads and steel shot, potentially resulting in 84 fewer tons of waste going to the landfill each year. In another project, he calculated that by using a new nonhazardous sealant on its 777X jet, the Portland plant could reduce its hazardous waste by 1.45 tons a year. 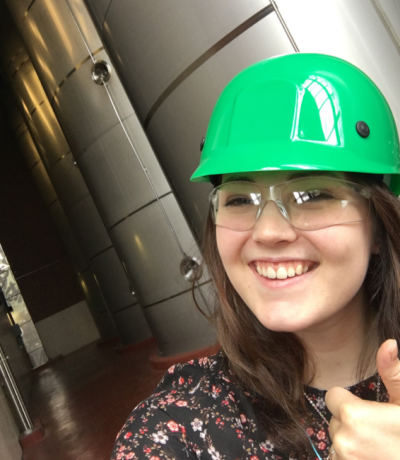 Emily Hodges, a 2018 graduate of OSU’s College of Liberal Arts, helped the Craft Brew Alliance analyze carbon emissions from the production of a variety of beers at three of its breweries. To reduce emissions, she recommended that the companies buy glass bottles and hops from vendors that are closer to the breweries.

Jensen Perrick, who is studying environmental science and urban development at Portland State University, was paired with Columbia Sportswear Co. She estimated how much money the firm could save if it were to install LED lights and occupancy sensors in the parking lot of its headquarters in Portland and LED lights in 19 stores slated for remodels in 2018 and 2019.

Ashley Baker, a master’s student in journalism at the University of Oregon, and Brit Swann, who graduated from OSU with a master’s in chemical engineering in 2017, worked with Northwest Green Chemistry. By surveying users of 3D printers in Oregon, they found that the 51 respondents throw out about 1,700 pounds of plastic each year.

Anika Sarkar, a master’s student in OSU’s School of Civil and Construction Engineering, interned with construction materials company Knife River. She helped create labels that disclose the environmental impacts – such as energy and water use – associated with the manufacturing of 479 concrete mixes at four plants.

Maya Vigil, who is majoring in Spanish and environmental studies at the University of Oregon, was paired with Nossa Familia Coffee and the Oregon Coffee Board. She created a best-practices guide that coffee roasters and cafés can use to decrease their carbon footprint and waste, as well as energy and water usage.

Sharlee Hughes, a geography student at PSU, calculated that if New Seasons Market donated 10 percent of its most commonly discarded foods each month, it could reduce monthly carbon emissions by an amount that’s equal to a vehicle driving about 4,400 miles. This is because the food wouldn’t be releasing methane gas in landfills.