NEWPORT, Ore. – The Visitor Center at the Hatfield Marine Science Center in Newport plans to reopen on Aug. 1 after a nearly 17-month closure due to COVID-19.

Tickets to reserve one-hour slots to enter the Visitor Center can be purchased at beav.es/hatfieldvctickets. Reservations can be made for times as far ahead as Sept. 30. If the maximum capacity has not been reached, people can buy tickets online at the door using their cellphones.

The temporary $3 admission fee for those ages 5 and older is necessary to help pay for extra staffing and public health measures, including enhanced cleaning, said Maureen Collson, the Visitor Center's manager.

No more than 50 visitors will be allowed inside per hour, with 25 people entering every half hour. They will have to follow a one-way loop and stay 6 feet from others. Per guidelines from the state and Oregon State University, face coverings will not be required; however, people are welcome to wear them if they wish.

Visitors will find a new interactive exhibit that simulates the bridge of a research vessel, which is being built in Louisiana and will be operated by OSU. Standing at the helm, they can steer the 199-foot R/V Taani through Yaquina Bay and watch their computer-animated surroundings pass by on a semicircle of five screens. 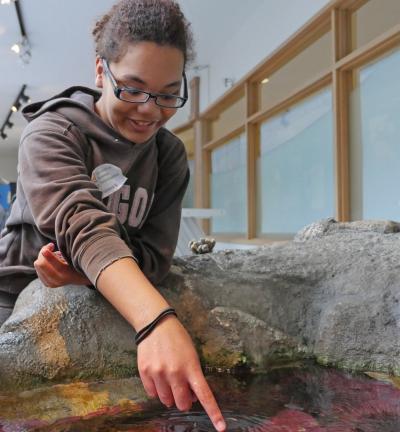 Visitors will also find a new exhibit featuring tanks of different species of locally caught crabs. To celebrate the National Oceanic and Atmospheric Administration’s 50th anniversary, which occurred in 2020, there’s also a timeline of the agency’s research in the Pacific Northwest.

Long-standing favorites are still there, including the indoor tidepool, where people can touch sea anemones, and tanks where they can learn about erosion and wave energy and crash waves against Lego structures. Coastal photos by Newport’s Bill Posner will be hung in the space of a former gift shop.

Before the pandemic, about 150,000 people each year passed through the doors of the Visitor Center, which opened in 1965 and has been managed by Oregon Sea Grant since 1997.

The Visitor Center will be open 10 a.m. to 4 p.m. Thursday through Monday and closed on Tuesday and Wednesday. The address is 2030 SE Marine Science Drive, Newport.