CORVALLIS, Ore. – Researchers at Portland State University have found what they think are tiny plastic fibers in about 120 Pacific oysters from the Oregon coast.

On average, 11 particles were found in each oyster, and nearly all were microfibers, said Britta Baechler, a PSU doctoral student on the Oregon Sea Grant-funded project.

“We don’t know if the levels we found would have any impact on the health of these oysters or the people or animals that eat them,” she said, adding that there are no regulations on what amount of microplastics is safe for either sea life or humans to eat.

The researchers are referring to the particles as “suspected microplastics” until they can analyze their chemical composition to determine if they are, in fact plastic. 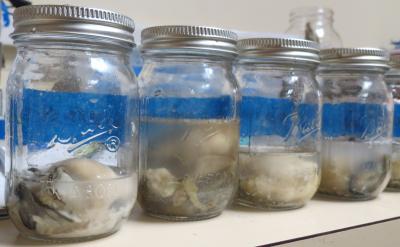 At less than 5 millimeters, microplastics can take the form of tiny exfoliating beads in cleansers. Also, foam packaging and plastic bags and bottles can disintegrate into small particles. And when people wash synthetic clothes, fibers can go down the drain and can end up in waterways and the ocean. That’s because wastewater treatment plants do not remove microplastics from the water.

Microplastics are worrisome because chemicals can adhere to them, and those chemicals might harm the organisms that eat them, Baechler said. Additionally, she noted that one study found that polystyrene microparticles impaired reproduction in Pacific oysters, and another study found that they damaged the DNA of clams.

In April 2017, Baechler purchased 10 Pacific oysters from each of six growers at the following sites: Tillamook Bay, Netarts Bay, Yaquina Bay, Winchester Bay, North Bend and Coos Bay. She did the same in July 2017.

The oysters were then taken to marine ecologist Elise Granek’s lab at PSU where they were measured, weighed, shucked and frozen. They were later dissolved in a chemical bath. The process leaves a clear liquid that contains only sand, small shell fragments and any plastics that may be present. Researchers analyzed the liquefied remains under a microscope.

They found between one and 42 suspected microplastics in each oyster. The amount varied depending on when the oysters were purchased. The ones from April contained an average of 14 particles versus an average of eight for the oysters from July. 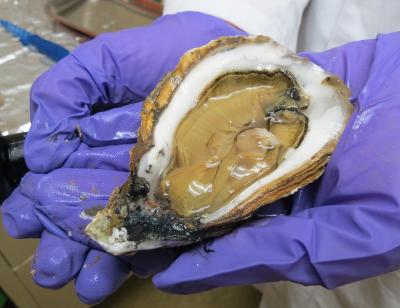 Baechler wonders if it’s because heavier rains in the spring wash more water and possibly more plastics, down storm drains and into rivers and the ocean. Or perhaps, she said, it’s because people launder different clothes in the spring than in summer.

Researchers also found that the fibers ranged in length from 0.1 millimeters to 6.1 millimeters. The average length was 1.2 millimeters, which is almost the thickness of a dime. Roughly three-quarters of the fibers were colorless, and 17 percent were blue. The average number of suspected plastics per gram of oyster tissue was about the same at each location.

Because microplastics are in the air and on surfaces, Baechler said that some of the plastics in the samples might actually have come from the lab. Researchers sought to prevent this by wearing all cotton and rinsing equipment three times.

They compared their data to findings from a few studies of microplastics in clams, mussels and oysters in a handful of countries. When comparing the number of microplastics per gram of tissue, they found that Oregon oysters had fewer microplastics than bivalves studied in China and western Canada but not Germany or Belgium.

“Ultimately, we’re hoping that this study brings awareness to Oregonians and even visitors to the state of Oregon that plastics that we use in our daily lives make their way into the environment,” Baechler said in a four-minute video that Oregon Sea Grant produced about the research.

The researchers conducted a similar study on razor clams they dug up at nine sites on the Oregon coast but are still analyzing data.