Researchers use simulations to help towns plan for tsunami

Researchers at Oregon State University have used computer and real-life simulations to help the coastal towns of Seaside and Newport prepare for a possible tsunami.

With funding from Oregon Sea Grant and the National Science Foundation (NSF), the researchers created a computer model to simulate how a partial or total failure of the roads and 10 bridges in Seaside during a tsunami-triggering earthquake might hinder people’s ability to flee to higher ground ahead of an encroaching wave. They experimented with scenarios using different percentages of cars and pedestrians and found that not all of the bridges impacted the mortality rate equally.

The researchers identified four bridges and one road as resulting in the greatest number of people being engulfed by a tsunami, should the bridges and road become partially or fully impassable. The finding was based on the starting points of 4,500 imaginary people and the routes they chose in the simulation and not on the structural integrity of the infrastructure.

“If we change the population distribution and other parameters, it may end up with a different road segment or bridge being the most vulnerable link,” said OSU civil engineer Haizhong Wang, who worked on the project with OSU civil engineer Dan Cox and OSU sociologist Lori Cramer. “What is important is that this simulation supports evidence-driven decision-making, and not necessarily that it shows which bridge caused the highest fatality.” 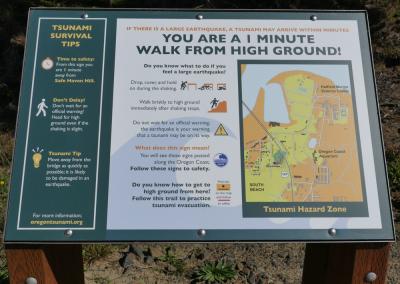 Without assigning specific dollar amounts, the researchers simulated how the mortality rate might change depending on how different amounts of resources were allocated to make those four bridges and the road more likely to withstand an earthquake. They found that a bridge on Broadway Street should have the highest priority for retrofitting. The finding was based on the fact that it was the most traversed bridge in their simulation; it was not related to the bridge’s construction or age. The team also found that different ways of spending resources can greatly affect the mortality rate.

“As an alternative, investing resources in building highly resistant shelter structures inside the inundation zone might be more economical than spending greater amounts of resources on retrofitting bridges or transportation links,” the researchers, who are in OSU's colleges of liberal arts and engineering, wrote in a paper in the journal Natural Hazards.

As part of the same research project, the scientists turned their attention south to the town of Newport where they studied the actions and decisions of more than 70 real-life people who participated in six mock tsunami evacuations.

Before beginning, volunteers downloaded on their mobile phones an app called Strava, which is commonly used by runners to track their routes and speed. Starting at either the Hatfield Marine Science Center or trailheads throughout the 500-acre South Beach State Park, participants were told a massive earthquake had just hit and that they had 30 minutes to flee by foot to higher ground before a tsunami washed ashore. Those who worked at Hatfield knew where to go because the center’s employees walk designated evacuation routes every year as a practice drill, Cramer said.

“We noticed that people who had practiced an evacuation before – like the people at Hatfield –  chose the shortest route and chose it faster, whereas people who hadn’t done a drill before made decisions that increased their chance of not reaching safety,” Cramer said.

She added that people who had never practiced an evacuation in the area said that the drills taught them to be more observant of potential routes and think about what they would do in the case of a real tsunami. 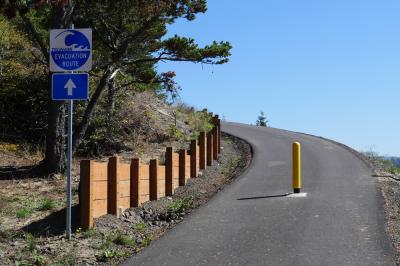 In some drills, people were handed envelopes with role-playing instructions to simulate real-life scenarios. In one situation, for example, participants pretended to be children who had the option of either finding their parents at the park’s visitor center or heading straight to a hill.

After each drill, participants debriefed with the researchers, discussed their actions and answered a survey. Researchers wanted to know how effective tsunami evacuation signage is for people who are not familiar with the area. They also wanted to learn how having participated in a previous drill affected route choice and evacuation speed, Cramer said.

The researchers also used a computer model to show how people might walk or drive to higher ground from the park and Hatfield. They aim to compare the real-life drills with the computer-simulated ones to understand how realistic the latter are.

Although the funding from Oregon Sea Grant has ended, leveraged funding from NSF is allowing the researchers to continue their work.

"The original Sea Grant funding was what kicked all this off, and that support played a key role in leveraging the NSF funding," Cox said.