Aquariums now have a first-of-its-kind tool for assessing the health of their giant Pacific octopuses, thanks to screening criteria developed by a biologist and an Oregon Sea Grant veterinarian.

Meghan Holst and Dr. Tim Miller-Morgan ground truthed their assessment tool and found that it empowered caretakers in making objective decisions about the welfare of a charismatic animal that is often humanized. They published their results in the Journal of Applied Animal Welfare Science.

The two created a list of criteria and then asked caretakers of 40 giant Pacific octopuses at 17 aquariums to rate the animals each week on a scale of 1-4 for at least six months or until the octopuses died or were euthanized. Caretakers observed appearances and behaviors such as skin color and texture, food consumption, respiration and growth rates, grooming, defensive behavior, inking and response to stimuli. 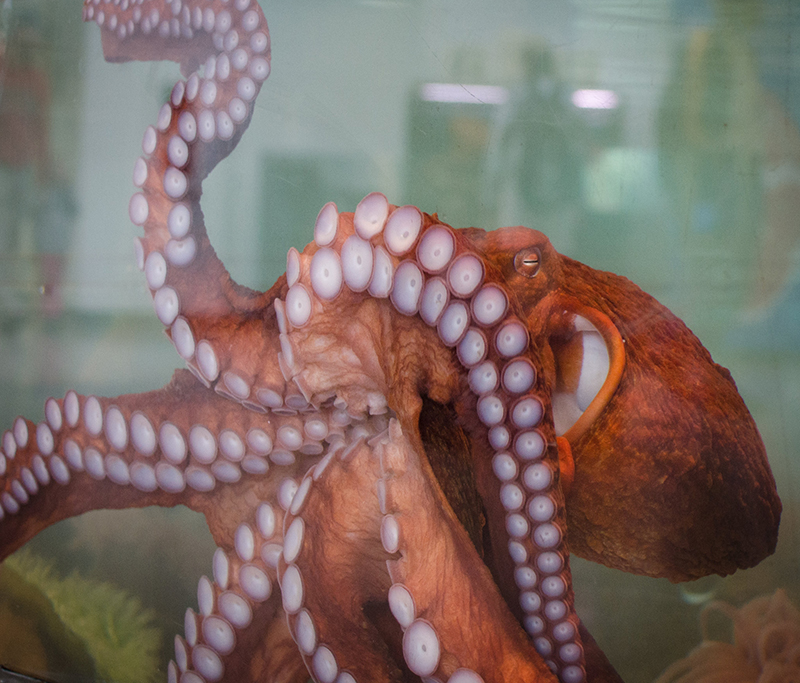 Because of their intelligence and how they interact with people “anyone who works with a cephalopod, particularly a giant Pacific octopus, is going to say they have emotion. But can we scientifically prove that? No,” said Miller-Morgan, an assistant professor in Oregon State University’s Carlson College of Veterinary Medicine. He's also a veterinarian for Oregon Sea Grant Extension and the Oregon Coast Aquarium.

“Cephalopods are notorious for being incredibly hard to interpret their behavior, and people like to anthropomorphize the animals that they work with a lot, especially … octopuses,” added Holst, a 2014 graduate of Oregon State in marine biology and a biologist at the Aquarium of the Bay in San Francisco. She and Miller-Morgan worked together when she was an aquarist at the Oregon Coast Aquarium in 2016-17.

Because of this tendency to anthropomorphize, caretakers sometimes let their own emotions take over when making decisions.

“People really tend to respond emotionally to the animal's behavior and what they see, but when you have such a hard time interpreting their behavior, those emotions can kind of get in the way of actually making a decision that is best for that animal,” Holst said.

While working at the Oregon Coast Aquarium, Holst realized she wanted a way to help remove her and her colleagues’ emotions from the equation. Specifically, she wanted a way to make qualitative, rather than subjective, decisions about end-of-life care as they related to senescence.

Giant Pacific octopuses typically live only three to five years, and senescence is the end of their reproductive period, which corresponds to the end of their lives. Like salmon, they only breed once before dying. During this period, their behavior changes and their bodies begin to break down. It’s hard for caretakers to assess whether the octopus is stressed or just showing natural signs of senescence, and what corresponding steps need to be taken for its welfare. Steps like taking the animal off display or, if quality of life is no longer good, euthanasia.

“When I had all these questions about trying to quantify these qualitative observations we had about cephalopods and what that meant for their welfare, I of course talked to Dr. Miller-Morgan and got some advice from him on how to evaluate those things,” said Holst, adding that in the United States, there are no welfare regulations for invertebrates in captivity.

The two looked across the Atlantic Ocean for inspiration in solving their Pacific puzzle. The European Union had recently released a matrix for observing cephalopod welfare as part of a broader set of guidelines on animal research. The pair made the matrix species-specific and created the first qualitative tool for evaluating the health of giant Pacific octopuses. 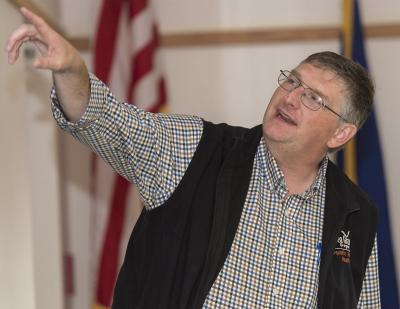 “Essentially, it's a scoring system. You would evaluate the animal over time, and then you could track those scores and that would help you make a decision,” Miller-Morgan said. “We're putting all that together into a matrix and coming up with a score: 1 being healthy, and 4 being we really need to have a discussion about [end-of-life care].”

For example, in evaluating food consumption, “the animals will go off feed, so they become anorectic where they stop eating and slowly start to lose weight,” Holst said. The matrix ranks that change from 1 to 4 as it occurs over time.

Another example is the categorization of how the octopus responds to stimuli. “Do they change color? What kind of position is their body in?” Miller-Morgan said. “An animal that is quite compromised, oftentimes will curl its tentacles up kind of over its mantle or over its head. And it looks kind of like a pumpkin the way it does that. And then it will be very pale, and it will stay pale. It won't change colors in response to stimuli.”

“This tool was really meant to empower [caretakers’] intuition,” Holst said. “It's never to replace it.”

Miller-Morgan added: “There's still a little bit of subjectivity, but it helps us all talk about this, which was one of the big drivers.”

Aquariums and other institutions have adopted the tool as part of their standard end-of-life decision-making process. “The response from the aquarium community has been overwhelming,” Holst said. “I get emails all the time asking follow-up questions, but primarily just saying, ‘I used this to help me make a really hard decision.’”

Holst herself relies on it in her caretaking work at Aquarium of the Bay. “It's been helping me a lot,” she said, “and I'm just absolutely floored that it's helping other people feel empowered to make the decisions that they're making.”