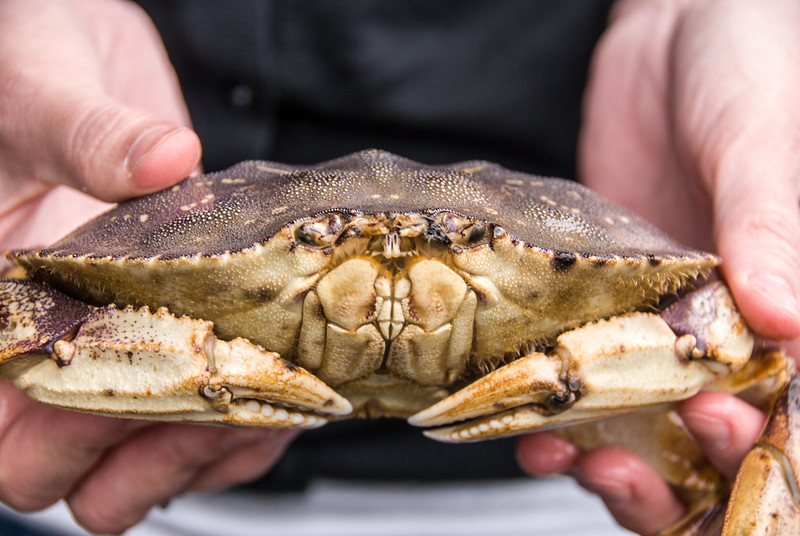 Dungeness crabs along the west coast are highly connected genetically, and as a result, there’s no need to change harvesting regulations to account for distinct subpopulations, according to a new study.

In the study, which was funded by Oregon Sea Grant, researchers also found high levels of genetic diversity among Dungeness crabs along the west coast, which is essential to the long-term viability of any species and the fishery, said lead researcher Kathleen O’Malley, the state fisheries geneticist with Oregon State University’s College of Agricultural Sciences.

“Our findings didn’t raise any red flags, such as evidence of low genetic diversity or distinct subpopulations that might warrant alternate management strategies,” she said.

The study also found that the farther apart the crabs are, the more genetically different they are.

“This means that migration, by adults or dispersing larvae, may be geographically limited,” O’Malley said. “This is an interesting finding given that Dungeness crabs were previously assumed to be widely dispersing.”

The findings came after O’Malley and her master’s student Tyler Jackson analyzed the DNA from more than 7,000 adult Dungeness crabs. These crabs were collected at 33 sites along an approximately 745-mile stretch from Washington to California in 2012 and 2014.

The researchers found that the degree of genetic connectivity among Dungeness crabs differed between years. They attributed the result to varying ocean conditions – including the seasonal transition from downwelling in winter to upwelling in summer – that influence the dispersal of larvae.

To better understand how ocean conditions influence this dispersal, O’Malley has initiated a subsequent study to examine the genomic diversity among Dungeness crab megalopae (their final larval stage) off the Oregon coast. The graduate student on this project, Elizabeth Lee, is partially funded by a Robert E. Malouf Marine Studies Scholarship from Oregon Sea Grant.

Jackson and O’Malley also looked at the genetic connectivity between adult Dungeness crabs at three sites along the Washington coast and at five sites in Puget Sound. Results indicated that genetic connectivity appears to be strong throughout most of Puget Sound, although one area, Hood Canal, was genetically distinct. Additionally, crabs in the sound differed genetically from crabs along the coast.

Jackson attributed these findings to the direction of ocean currents and the long water retention in Hood Canal and Puget Sound, which limits the dispersal of larvae. Jackson said the results from Puget Sound, which were published in the journal Marine Biology, support the current management strategy there.

During the 2016-17 season, fishermen in Oregon landed 20.4 million pounds of Dungeness crabs, which they sold for a record $62.7 million, according to the Oregon Department of Fish and Wildlife. Dubbed the official state crustacean, Dungeness crabs make up the most valuable single-species commercial fishery in Oregon.