"What's this weird-looking thing I found on the beach?"

"How can I tell if it's safe to dig for clams?"

"Help! There's a baby seal on the beach; what should I do?"

Ever since we opened in 1965, people have turned to the Visitor Center when they have questions about the things they discover and experience on the Oregon coast. Our marine educators and scientists often know the answers - or how to find them.

Here are some common questions we received, and the answers: 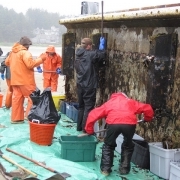 Q. What should I do if I find something on the beach that I suspect may have come from the tsunami that occurred in Japan in 2011?

A. The March 2011 Japanese tsunami ejected massive amounts of debris into the Pacific Ocean. Some of the floating debris is expected to show up on beaches in North America. The first large piece of Japan Tsunami Marine Debris to arrive was a large dock that washed up in Newport in early June 2012. A section of the dock is on display near the entrance to the Visitor Center.

The state of Oregon recently set up a telephone hotline where the public can ask questions about tsunami debris. Just dial 211. If you experience technical problems with the hotline, use the backup number: 1-800-SAFENET.

Marine debris items or significant accumulations potentially related to the tsunami can be reported to [email protected]. For more information, visit the Japan Tsunami Marine Debris website, or download a flier.

The flier advises: If you find something that you think might be tsunami debris, use common sense and follow general safety guidelines. If you don't know what an item is, don't touch it. If it appears hazardous, contact the appropriate authorities.... It is important to remember that not all debris found on U.S. shorelines is from Japan, so please use your discretion when reporting items. 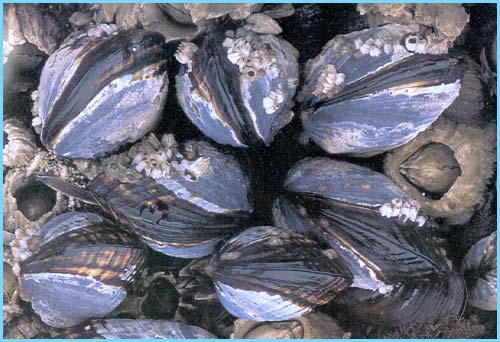 Shellfish Harvesting on the Coast

Q. How can I tell if there's a red tide on the beaches?

A. "Red tide" is the colloquial term for a naturally occurring "bloom" of marine algae, some of which are red. Red tides are of concern because they can signal an increase in toxins secreted by the algae. Since clams and other shellfish consume algae, harmful algal booms can make the shellfish unsafe to eat. The Oregon Department of Fish and Wildlife monitors Oregon's beaches for algal blooms and toxicity levels. When the level is high, the state may close affected beaches to the harvesting of clams, mussels and other shellfish. Typically this occurs during the summer months.

To find out whether such a closure is in effect when you visit the Oregon coast, and whether it's safe to harvest and eat shellfish, call the state's Shellfish Safety Hotline at 503-986-4728 or 1-800-448-2474, toll-free, or visit their website. 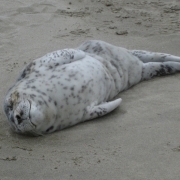 Seal Pup Found on the Beach

Q: We found a seal pup alone on a beach. Its mother didn't seem to be anywhere around, but there were a lot of people on the beach taking notice of the pup. What should we do?

A: The Oregon Marine Mammal Stranding Network (OMMSN) responds to reports of stranded or injured marine mammals on Oregon beaches, and is based at HMSC. From the OMMSN webpage: "In the spring, harbor seal pups are frequently found alone on the beach. They are usually not stranded, but simply resting (as all baby mammals must do) and waiting for their mothers to come back ashore to nurse them. Adult female seals are shy and a mother is unlikely to rejoin a pup if there is activity nearby. She may only return to suckle her pup at night when people are not around. It is very important not to interfere with this process, and especially not to move a pup from where it is receiving care from its mother. Within three or four weeks of birth, harbor seal pups are weaned from maternal care and are left to fend for themselves. While learning to find and catch its own food, a young seal may come ashore frequently to rest. This is often a very challenging stage of life, and not all pups survive. But while it may be tempting to “take them in,” their best chance for survival is to be left alone on the beach."

Sometimes the OMMSN will post signs to alert the public to the presence of a seal and encourage all to keep a respectful distance from the resting animal. If you are concerned about the welfare of a seal pup or any other marine mammal you encounter, report it to the 24-hour Oregon State Police hotline at 800-452-7888. Please describe the situation and location of the animal so the OMMSN can follow up on your concerns. 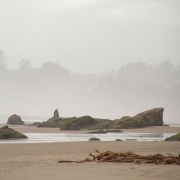 Q. I am a teacher in the very early planning stages of a field trip to Newport. Would you be able to assist me in finding the lowest tide dates next spring so that we can set dates for our field trip?

Q. Hello, I was wondering if you could identify the animal in the attached photos.

I was walking on the beach south of Waldport, at Tillicum Beach on March 24, 2009, and this was washed up on shore. The total length was around 4' long. My first thought was an eel, but looking at the photos, it doesn't seem to match.

A. Marine educator Bill Hanshumaker identified this animal as a lancet fish and notes that he received a report of a lancet fish stranding near Beverly Beach around the same time.

Lancet fish are large oceanic predators in the genus Alepisaurus ("Scaleless lizard"), the only living genus in the family Alepisauridae. They can grow up to 2 meters (6.6 feet) in length. Even though lancet fish are widely distributed in all the world's oceans (except the polar seas), very little is known about their biology. 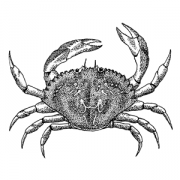 Can I Crab off Your Dock?

Q. I recently moved to Oregon from the East Coast and I'm ecstatic about being able to catch my own clams and crabs on the coast. When I've gone crabbing I go to the Newport public fishing pier by the Rogue brewery. I've noticed a dock off of that east end of your parking lot and see a sign that says official vehicles only, but nothing about people. As you've guessed by now I'm curious if I can crab off of that dock.

A. The pier is where Oregon State University's research vessels, as well as visiting research ships, tie up when they're in port. For liability reasons, we need to keep it off-limits to the public, except for special events such as public vessel tours. You can find many public docks in Newport where crabbing is permitted, though; try the South Beach marina area. Don't forget: In Oregon, you need a license to catch crab, clams and other shellfish. Licenses are available wherever fishing licenses are sold or can be purchased online from the Oregon Department of Fish and Wildlife.

‹ Exploring Our Coast up Marine Education ›