2 nonnative beach grasses have hybridized in Oregon and Washington

Two species of beach grasses planted in the Pacific Northwest about a century ago to stabilize sand have created a hybrid, raising questions about possible implications for coastal ecosystems.

With funding from Oregon Sea Grant, researchers in Oregon State University’s College of Science found that the beach grasses that dominate the Northwest’s dunes, Ammophila arenaria and A. breviligulata, have hybridized. They described the hybrid in a paper in the journal Ecosphere.

The researchers said the hybrid, which was first observed in 2012, has been found at 12 locations in Washington and Oregon. Genotyping and genome-size comparisons show it is a first-generation blend of the two introduced beach grasses, whose ranges overlap. 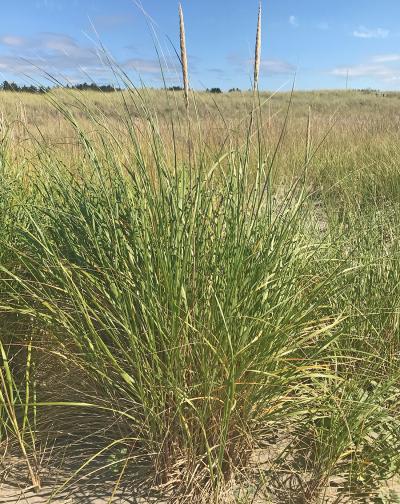 “As far as we know, the Pacific Northwest is the only place in the world where the two Ammophila species have had the opportunity to hybridize,” said Rebecca Mostow, a doctoral candidate and the lead author on the paper.

A. arenaria is a European species and A. breviligulata is an American species. Professor Sally Hacker, another author on the paper, noted that A. breviligulata is better than A. arenaria at establishing its place in an ecosystem because it competes better, but A. arenaria builds taller dunes. Dunes comprise nearly half of the combined coastline of Oregon and Washington and a quarter of California’s.

The hybrid’s traits fall between its parents in many ways, but the hybrid is taller, which is particularly important because shoot height is an indicator of dune-building potential.

“If the hybrid exceeds its parents in traits associated with dune-building, which it very possibly could, then its spread could affect dune shape and size and have huge, ecosystem-scale consequences,” Hacker said. “Hybridization could end up resulting in a really invasive taxon or increasing the invasive potential of either parent species.”

She added, “Understanding the ecological and population genetic consequences of the hybridization is critical in a system where any change in dominant beach grass species can have large effects on both biodiversity management and coastal protection.”

Beach grasses grow in stiff, rugged clumps capable of reaching 4 feet tall. Their strong rhizome mat – the mass of underground stems – helps stabilize the sand and allows for fast colonization. These clumps are able to capture sand and build dunes at rates of up to 3 feet per year.

In the early 1900s, U.S. Pacific coast dunes were planted with A. arenaria to stabilize the shifting sand.

“By the 1950s, Ammophila arenaria had spread from Mexico to Canada while building tall, continuous coastal foredunes,” Mostow said. “Midway through that spread, in the 1930s, Ammophila breviligulata was planted in dunes near the Columbia River. Over the next 50 years, it moved north and dominated the sandy Washington coast. And there’s no doubt the spread of these beach grasses has had a positive impact on development by stabilizing the ground and building dunes that protect the coastline.” 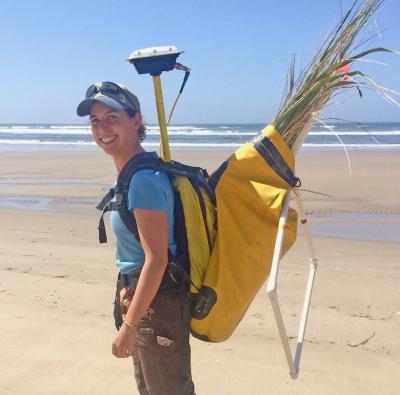 As with many introduced species, though, the beach grasses come with ecological costs to the native flora and fauna. Resistant to pests and grazing, the hardy, densely growing plants have changed the ecology of dunes by displacing native plants and animals, including pink sand verbena and the endangered western snowy plover.

Learn more about the hybrid and the research in this talk by Mostow. Other funders of the project were the National Science Foundation and the Washington Native Plant Society.

To help find more patches of the hybrid and map their locations, researchers are encouraging beachgoers to look for and photograph the grass and submit the images to a website called iNaturalist.