Researchers from the Geospatial Ecology of Marine Megafauna Laboratory at OSU’s Marine Mammal Institute used drones to monitor 171 whales off the Oregon Coast during the foraging season between June and October in 2016, 2017 and 2018. 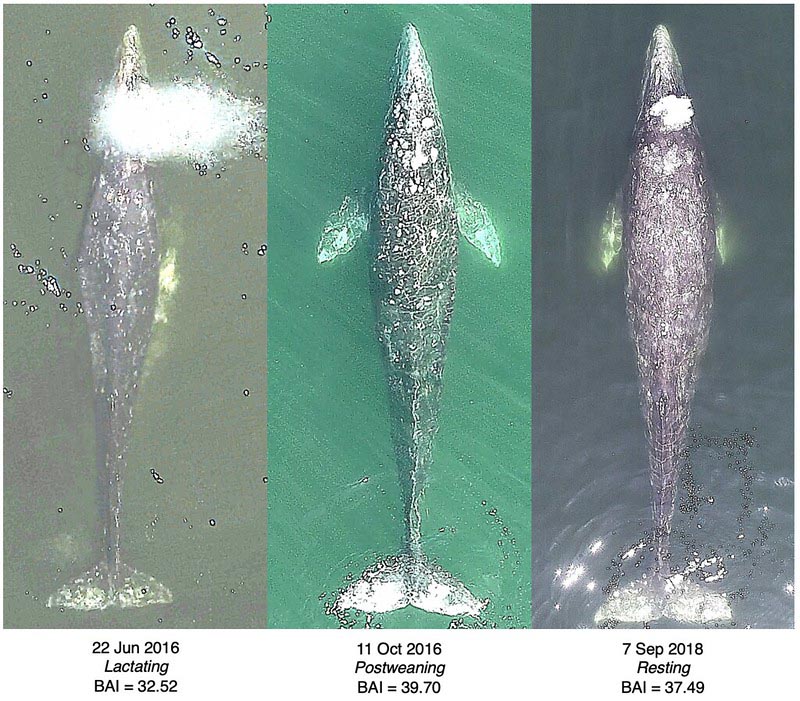 They found that the whales’ health declined following a period of relatively poor upwelling – an ocean condition that brings colder, nutrient-rich water closer to the surface – compared to previous years.

“What we see is this compelling relationship between the oceanographic processes that control the quality and quantity of available prey and whale health,” said Leigh Torres, an assistant professor with the Marine Mammal Institute and the lab’s director. “This research gives us an inclination that changes in ocean conditions might be causing skinny whales.”

The findings may also provide insight into the unusual gray whale die-off event that occurred in 2019 along the Pacific Coast, Torres said. More than 200 gray whales were reported dead between Mexico and Alaska last year, including six in Oregon. Many of the deceased whales appeared to be in poor body condition, meaning they looked skinny.

The study was just published in the journal Ecosphere. The paper’s lead author is Leila Soledade Lemos, who recently completed her doctorate at Oregon State and worked with Torres in the GEMM Lab.

Torres and her team conduct “health check-ups” on the whales using drones to capture images and nets to capture fecal samples – two methods that provide researchers a lot of information in a noninvasive way, reducing stress on the whales.

Lemos used images captured by the drones to calculate the whales’ Body Area Index. The BAI is similar to the Body Mass Index, or BMI, in humans, because both allow for comparisons among individuals despite differences in length and height.

The Body Area Index is a measurement that allows researchers to compare changes in individual whales as well as the population as a whole during the course of the feeding season and from year to year. The fecal samples help researchers determine a whale’s hormones, sex and diet.

Gray whales typically arrive on the foraging grounds on the skinny side, then in ideal conditions will bulk up over the course of the summer in preparation for migration and breeding.

“With this research, we’re trying to understand more about the health of the whales and how it varies throughout the foraging season and from year to year,” Torres said. “Once we establish a baseline for whale body condition, we can start to see what is healthy and what is not and why.”

The researchers often encounter the same whales multiple times in a season, or from one year to another, and have gotten to know their markings and features well enough to spot the whales by the names they’ve been assigned, such as Spray, Knife and Clouds.

“The first year the whales looked really fat and healthy. But after 2016, the whales were really skinny. You could see their skeletons,” Lemos said. “For these whales, body condition is strongly related to food availability. It is also related to when they invest in reproduction.” 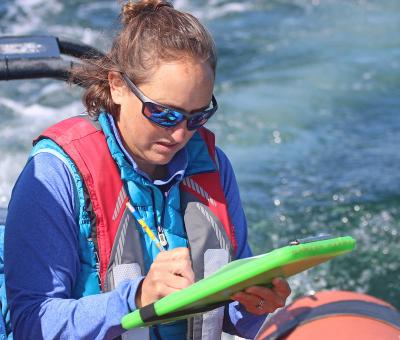 The researchers noted nine pairs of mothers and calves in 2016, but only one pair each in the two following years. Calves had the highest Body Area Index numbers, followed by pregnant females. Lactating females had the lowest BAI and the most depleted body condition.

The poor upwelling may have caused a shift in the availability or quality of zooplankton, the whales’ primary prey. But the impact of the changing food supply really became noticeable a year after the poor upwelling condition began.

“There was a one-year lag, or carry-over, between the lack of prey in 2016 and the whales’ body condition the next year,” Torres said.

One of the whales that died during the 2019 event had been observed and catalogued in previous years by Oregon State researchers.

The study highlights the value of monitoring whale health over time, Torres said. The researchers now have four years of data on Oregon’s resident whales and hope to continue monitoring them to better understand health patterns in the population and how they connect to changing ocean conditions.

The research was supported in part by the NOAA National Marine Fisheres Service Office of Science and Technology Ocean Acoustics Program; Oregon Sea Grant; and the OSU Marine Mammal Institute. Lemos received funding from Brazil’s Science Without Borders Program and its National Council for Scientific and Technological Development (CNPq).