CORVALLIS, Ore. – A handful of salt marshes in Oregon have been gaining height at a rate that has outpaced the rising sea – a finding that bodes well for their ability to survive and store carbon amid a changing climate, according to research by Oregon State University.

With funding from Oregon Sea Grant, scientists studied how much sediment from rivers had settled in salt marshes in seven of the state’s approximately two dozen major estuaries. They also determined how much the sea was rising, if at all, in those estuaries; how much carbon was in the marsh sediments; and how fast sediment and carbon had accumulated. They wanted to know how a rising sea and sediment from rivers might have affected the amount of carbon stored in the marshes since about 1900. 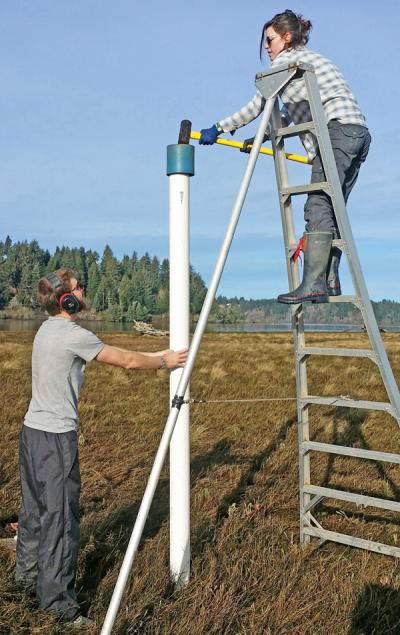 The researchers collected 62 sediment cores from marshes in Youngs, Nehalem, Tillamook, Netarts and Alsea bays and the Salmon River and Coquille River estuaries. They found that except for the marsh in Alsea Bay, the other six marshes had managed to accumulate enough sediment over the past 100 years to outpace the rising ocean. They do not yet know why the marsh in Alsea Bay lags behind the others.

“Because our findings show that abundant sediment is supplied from rivers and creeks in six of these marshes, we predict that these six marshes will continue to accumulate sediment at a rate that will keep them above sea level. In other words, they won’t drown,” said Erin Peck, a doctoral student on the project and a 2018-19 Robert E. Malouf scholar funded by Oregon Sea Grant. “That’s great because they will continue to bury carbon.”

Peck explained that as the ocean rises, more carbon-laden silt from rivers can pile up in the dense vegetation of salt marshes. The mud in the wetlands traps the carbon and doesn’t allow it to decay and be released into the air as carbon dioxide, which is a greenhouse gas. In addition to locking up carbon, marshes are also important because they provide habitat for salmon and birds, keep coastal waters clean, and offer recreational opportunities.

To conduct their research, Peck and her crew stood on an orchard ladder and pounded PVC tubes up to nine feet into the wetlands with a sledgehammer. Sometimes they were up to their knees in murky water; other times they worked in gooey mudflats and grassy fields. They’d inch the tubes out of the ground with a truck jack. Back at the lab, they’d split them open. The cores were like a timeline, with the newer mud at the top and, in some cases, sediment from a massive earthquake and tsunami in 1700 farther down. 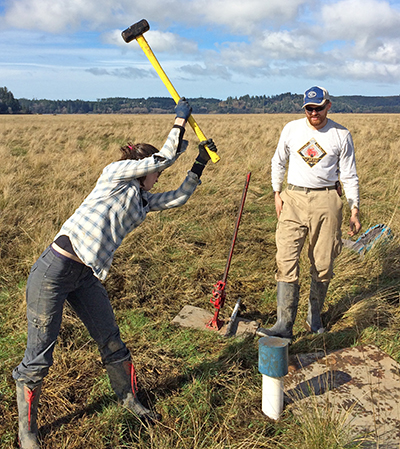 “These linkages lead us to believe that as sea level rises, carbon burial rates will probably also increase,” Peck said.

She found that marshes in the Salmon River Estuary and Nehalem Bay had buried the most carbon per square meter each year.

“Areas with higher rates of sea-level rise and sediment accumulation, like the Salmon River Estuary and Nehalem Bay, are doing the best job at sequestering carbon,” she said.

Peck also found that the rates at which carbon was buried in each of the seven marshes were similar to the average for various marshes around the world.

Rob Wheatcroft, a sediment expert in OSU’s College of Earth, Ocean, and Atmospheric Sciences, and Laura Brophy, the director of the Estuary Technical Group at the Institute for Applied Ecology in Corvallis, are the other researchers on the project.

Update as of 2/21/20: After further analysis of additional sediment cores from the Salmon River Estuary, Peck and her colleagues now believe tidal saline wetlands in not only Alsea Bay but also the Salmon River Estuary are not keeping pace with sea-level rise. This means that of the seven estuaries studied, two showed evidence of drowning over the last century. The reason is unclear, but research is ongoing. More details are in this journal article.