When Kelly Reesman set foot in the Oregon Sea Grant-operated marine education center in Newport, her eyes landed on a large aquarium jutting out from a floor-to-ceiling rock. “Oh, you got a new octopus tank,” she said to the greeter.

It had been a year since the tourist from La Pine had last seen the facility, which is known as the Visitor Center and is part of the 49-acre Hatfield Marine Science Center. Reesman was pleasantly surprised to see the remodeled exhibit, now with cave-like, concrete rockwork, a raised tank and rustic pilings and planks, which make the tank look like it’s under a pier. 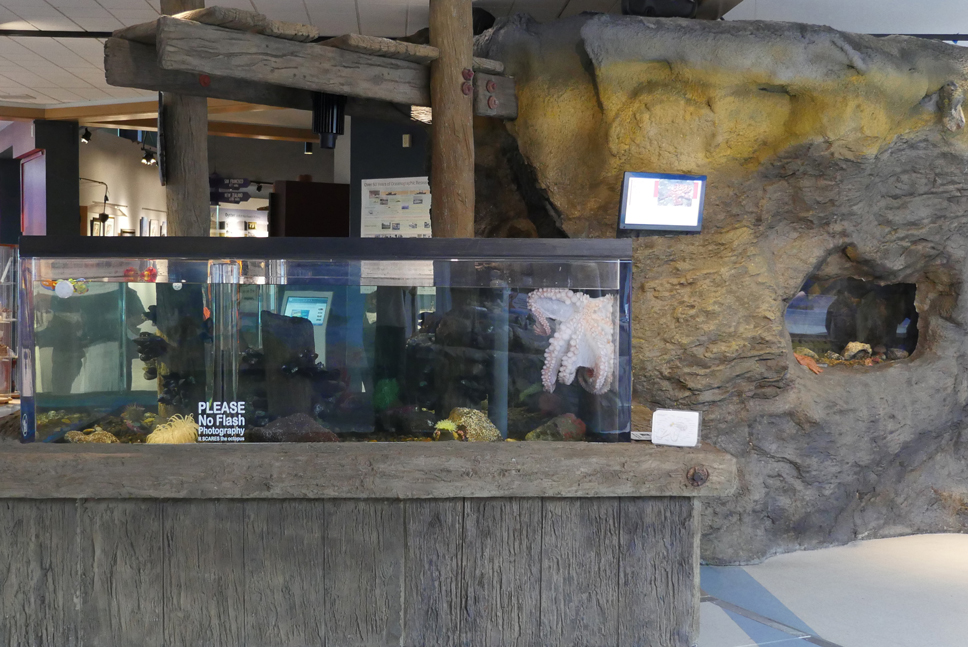 The updated octopus lair is part of a larger, three-month overhaul of rusting tank stands that wrapped up this spring. Contractors replaced the 21-year-old metal supports then sculpted artificial rockwork around and under the tanks. They modeled the rocks after real formations in the Newport area. In the process, aquariums were emptied and hundreds of animals, including rockfish, pipefish and ratfish, were temporarily relocated.

Oregon Sea Grant used the renovation as an opportunity to remove some exhibits, add others (including marine-inspired art), paint walls, and redesign the layout using a theme based on habitats, such as a kelp forest. More displays are in the works, but the idea is that as visitors walk past the tanks, they’ll move from shore to shallow water to deep sea. The exhibits will describe research taking place in those environments. 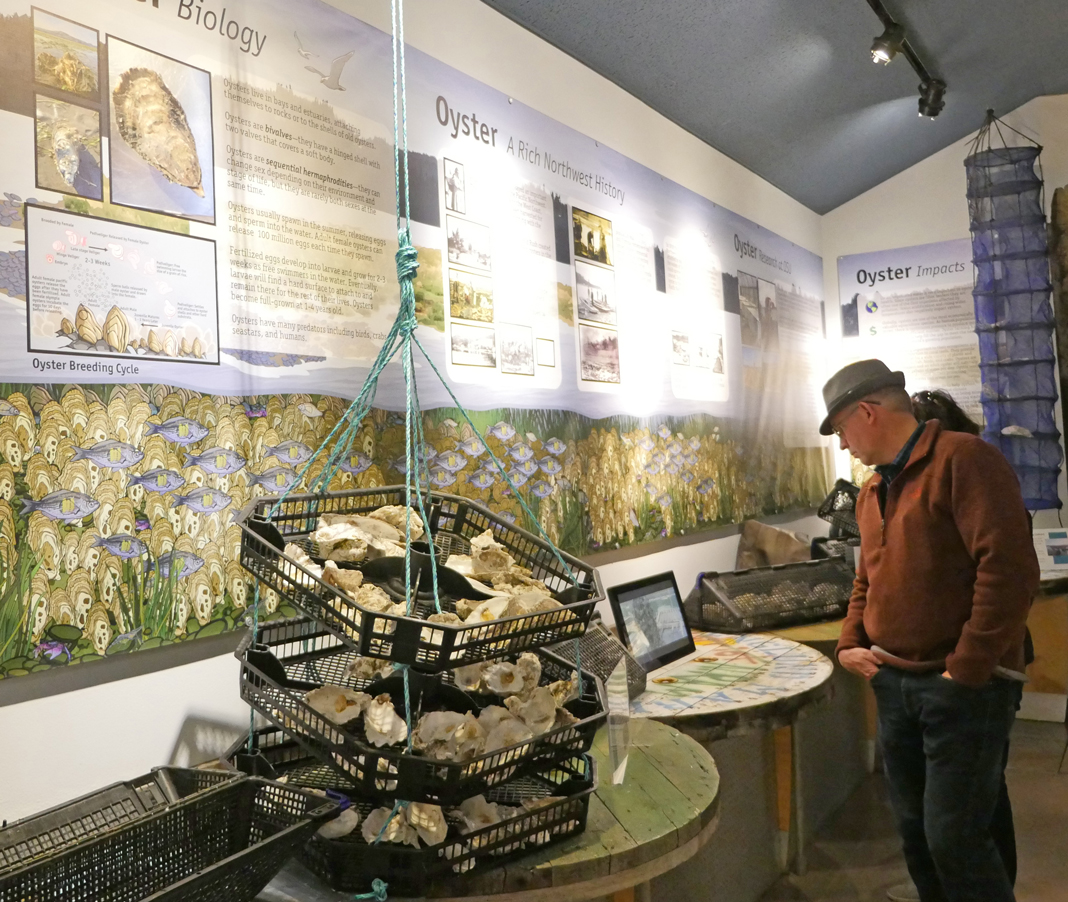 For example, a new exhibit in the estuary-themed area explains how scientists are breeding oysters with improved genetics.

Although new exhibits will be added, visitors can still enjoy the perennial favorites, including the indoor tidepool, where they can touch sea anemones, and the tsunami flume, where they can crash waves against Lego structures.

“My kids love this place,” said Wendy Connerly, of Philomath, who has visited the center with her husband and seven children on multiple occasions. “I love this place because I can sit down and see my kids. It’s a safe environment. The kids can explore on their own.” 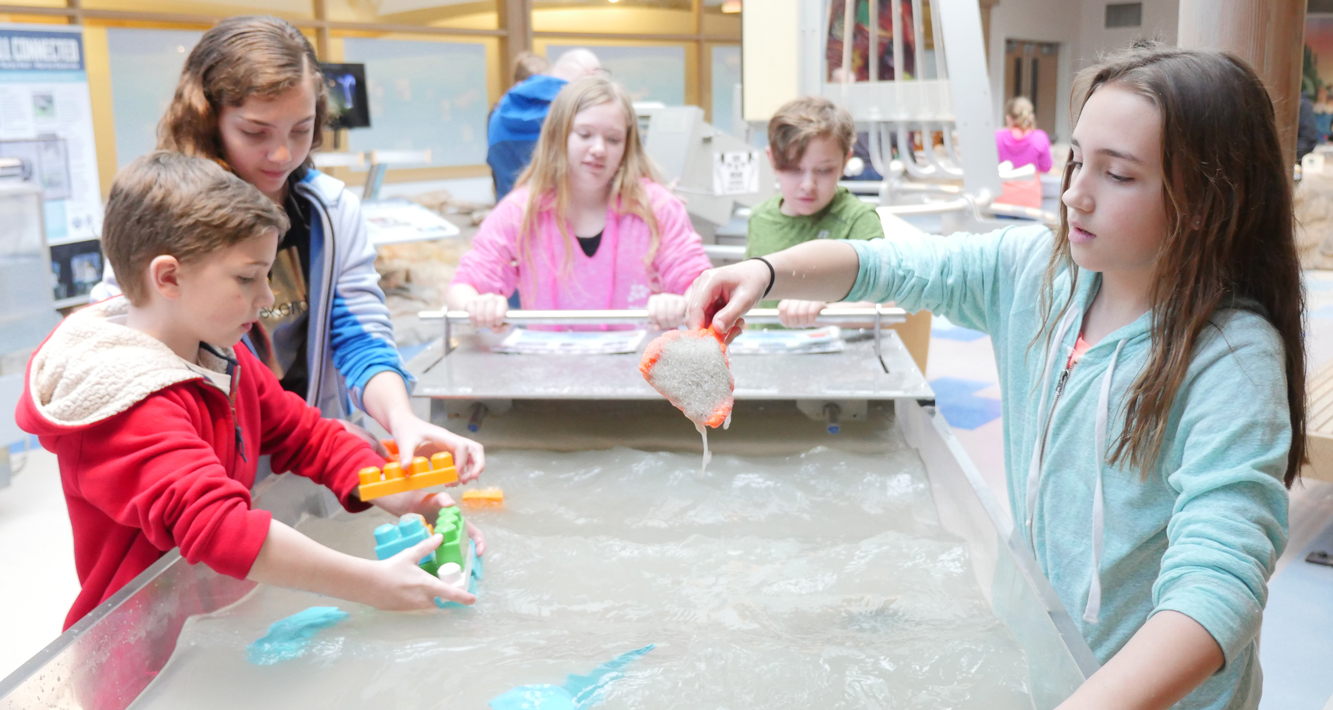 While Connerly’s children explored, Tonya Adams watched her son and daughter create waves in a tank that simulates beach erosion. “I love how much the kids can touch and play with everything,” Adams said. “And they’re having fun learning.”

Last year, about 150,000 people passed through the doors of the Visitor Center, which is staffed by Oregon Sea Grant employees and more than 60 volunteers. Wanting to know the economic impact of the center and all those visitors, Oregon Sea Grant commissioned an analysis in 2017 by Bruce Sorte, an economist with the Oregon State University Extension Service. He estimated that the Visitor Center, which costs $460,000 a year to operate, annually supports $7.6 million in income for Oregonians, $13.2 million in sales for businesses in Oregon, and 156 jobs throughout the state.

These figures include the salaries paid to employees at the center; the multiplier effect of those salaries; the amount of money visitors spend on food and lodging; and the household expenditures of Oregon Sea Grant employees and people who supply goods and services linked to the center, which is funded by the federal government, OSU and donations.

“Since 1965, the Visitor Center has been teaching children and adults about marine science through fun, hands-on exhibits,” said Shelby Walker, the director of Oregon Sea Grant. “Although you can’t put a price tag on the value of that experience, as Bruce’s analysis shows, we can estimate the important economic contribution of the Visitor Center to Lincoln County and the state.”

Beaverton resident Walter Bates knows about the value of the center. Born in 1967, he’s been visiting it since he was a kid. Over spring break, he was there with his wife and daughter. “We really enjoy it. It’s always been a favorite spot, and now it’s even nicer,” he said of the renovation.