An exhibit at the public education wing of the Hatfield Marine Science Center in Newport uses ceramic art to raise awareness about 28 threatened or endangered species in the Pacific Northwest.

Housed at the Oregon Sea Grant-operated Visitor Center, the display showcases whales, seals, turtles, fish and seabirds. Coho salmon, for example, swim around the smooth surface of one ceramic bowl as a southern sea otter floats along the opposite side. On the outside of a white pot, two yelloweye rockfish swirl through dark kelp, and on a tall vase, three beluga whales glide through a black glaze. 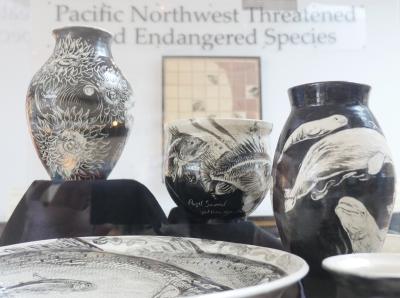 Mary Arkoosh, a Newport-based microbiologist with NOAA's Northwest Fisheries Science Center, sculpted the pottery, and Ram Papish painted it. Papish is a former wildlife biologist who is now a full-time artist, wildlife illustrator and children's book author in Toledo, Oregon.

Using a technique called sgraffito, Papish painted the clay before it dried. Then he scratched textures and patterns into the painted surfaces and applied a clear gaze before the pieces were fired.

The most challenging creature to depict, Papish said, was the eulachon, a small, silvery fish also known as the candlefish. They're so fatty they were dried and burned like candles for light by early explorers.

Papish's favorite species in the exhibit is the bearded seal. "I really like how that one came out. Its long, curly whiskers make it look fun, which I wasn't expecting," he said. 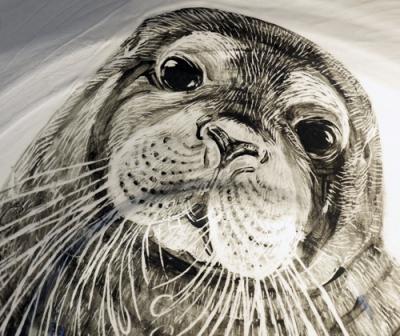 "This project was a great way to combine art and science to show how beautiful threatened and endangered creatures are, and to convey that beauty and inspire without using scientific jargon," said Arkoosh, who spearheaded the project. "The people at Oregon Sea Grant were very excited about this project and have been very helpful in bringing it to life."

Maureen Collson, the manager of the Visitor Center, said the ceramics are part of a growing effort to add more marine-inspired art to complement the research-focused exhibits and reach a wider audience.

"Mary is a marine researcher, and we have worked with Ram on other exhibits – including a wall mural featuring real walrus tusks – so it was a natural collaboration and wonderful way to focus on sustainability and empower visitors to enjoy and protect our marine ecosystem," Collson said.

Arkoosh met Papish in a beginning ceramics class five years ago and reached out to him when developing the grant proposal for the project, which received $12,000 from the National Oceanic and Atmospheric Administration’s Preserve America Initiative. The initiative awards 10 small grants annually to projects highlighting NOAA’s heritage assets, including research ships and nautical charts. 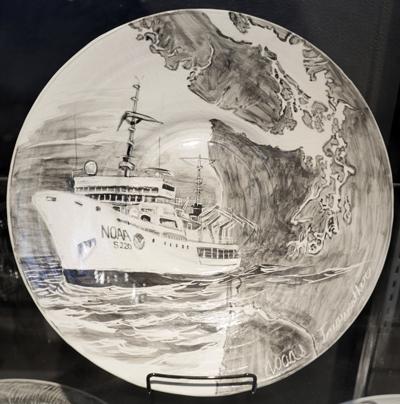 With this in mind, Papish painted two NOAA research ships – the Bell M. Shimada and the Fairweather – on two plates. He and Arkoosh also created a wall display of 63 coaster-sized tiles depicting a chum salmon, an olive ridley turtle, a fin whale and other species laid over a NOAA nautical chart.

Rick Brown, a Newport-based program manager for NOAA, said the project is a great example of how a relatively small investment can make it possible to reach a lot of people.

"This gives us one more way of communicating science through art," Brown said. "Some people might not want to read anything, but if they look at a plate with a killer whale on it, they walk away with a better understanding. And it attracts a wide age range of people – from pre-K to gray, as I like to say." 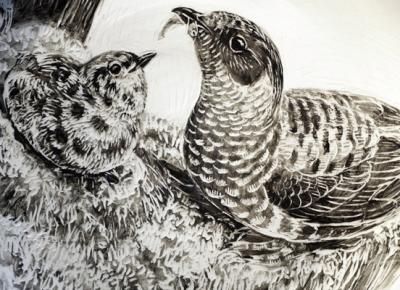 That includes people like Dave Mack. The truck driver from Oregon City was looking at the ceramics as his grandkids explored the Visitor Center. “It’s a different way of showing stuff we need to hear about,” Mack said. “It’s three-dimensional, so [the exhibit] catches your eye. It’s more than words on paper.”

In addition to Oregon Sea Grant, other collaborators on the project included Oregon State University, NOAA’s Northwest Fisheries Science Center, the headquarters for NOAA's Pacific fleet, and the U.S. Fish and Wildlife Service in Newport.

Photos of the ceramics display and other exhibits at the Visitor Center are in this album on Oregon Sea Grant’s Flickr page.