Students learn how to conduct research aboard OSU ship

Students on the Oregon coast are getting a taste of what it’s like to conduct research at sea thanks to a series of daylong cruises funded by Oregon Sea Grant.

The first trip took place in April, and nine more outings are scheduled in June and September – all of which will depart from and return to Newport. By the end, 100 high school and community college students and nine of their teachers will have boarded Oregon State University’s 84-foot Pacific Storm to learn how scientists from OSU collect plankton, identify organisms in seafloor sediment, track whales and detect green sturgeons.

“The goal is to get students involved in real-world research, with the idea that people learn best by doing,” said Tracy Crews, who manages Oregon Sea Grant’s marine education program and is organizing the trips.

The cruises are part of Oregon Sea Grant’s efforts to increase students’ interest in science, technology, engineering and math and prepare them for jobs in these fields. 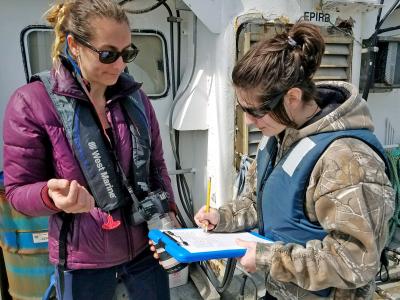 “Some of the concepts we teach are obscure and hard to wrap your brain around until you’re out there doing it,” Crews said. “So going out to sea and collecting data and interacting with researchers helps solidify the concept. Plus, we’re hoping to inspire the next generation of marine scientists.”

During April’s sailing, for example, five students from Toledo High School tested two sensors that measure the salinity and temperature of the water at various depths. They had spent several months assembling and fine-tuning the devices in class.

“It was exciting to see how they’re deployed,” said student Dana Nyberg. “We know what they’re used for but had only tested what they did in the bay. So to take them out to sea was super exciting.” 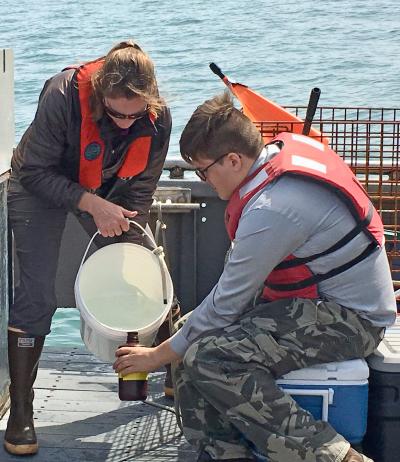 Five other students who are learning to fly drones at Career Tech High School in Lincoln City watched OSU research assistant Todd Chandler, OSU graduate student Dawn Barlow and the ship’s captain try to track a gray whale to photograph it with a camera-equipped drone overhead. It was part of research by Leigh Torres, a marine mammals specialist with Oregon Sea Grant, that aims to understand the health and habitat of gray whales.

“It was cool seeing them work as a team,” said student Jason Miranda. “Their communication is great, how they talk to each other, give each other directions to where the whale is. They have to be quick. They have a time window to get the photo and get out.”

OSU research assistant Jennifer Fisher showed the students how to collect plankton with two large nets. They later examined the tiny sea life, which included crab larvae, under a microscope.

The students also learned what it’s like to work on a ship. Nyberg, who has watched boats go in and out of her local bay, left with a new appreciation of what their crews do – from piloting boats at night to watching out for crab pots to braving storms. 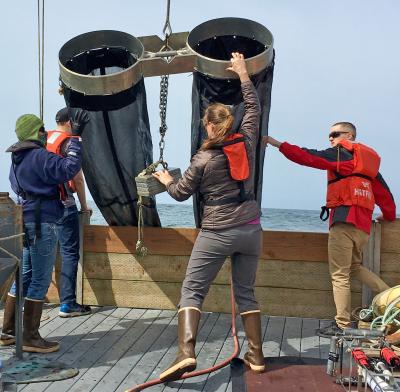 “It opened my eyes and gave me a bigger mindset in terms of what they have to go through,” Nyberg said.

The students also learned about seasickness.

“It was pretty choppy when we started out,” Crews said. “Many students had never been out on the ocean and several learned first-hand how it can affect you physically.”

During cruises this summer, students will help OSU professor Sarah Henkel detect tagged green sturgeons moving through a future wave energy test site. They’ll also learn to collect sediment from the seafloor at the site to see what organisms live in it. In addition, students will continue to assist Torres’ team with the whale monitoring and Fisher with her plankton sampling. The students will come from schools in Newport, Tillamook, Toledo and Lincoln City.

This is the second year that faculty with Oregon Sea Grant have led cruises for students and educators. In 2016, Crews and Torres led a three-day expedition aboard the OSU-operated Oceanus. Oregon Sea Grant will lead a similar trip on the Oceanus this September.