Oysters, estuarine clams and freshwater mussels in watersheds along the Oregon coast contain pesticides used in managing forests, according to a study funded by Oregon Sea Grant.

Researchers from Portland State University found pesticides in 38% of the tissue samples. Indaziflam, an herbicide currently used in Oregon forestry, was found in about 7% of the samples. Contaminants also included pesticides used in orchards, Christmas tree farms and homes, as well as banned pesticides, including DDT byproducts.

The study, published in the journal Toxics, may help guide forest management practices to reduce the amounts of forestry chemicals entering aquatic ecosystems.

The study was led by Kaegan Scully-Engelmeyer, a doctoral student in the earth, environment and society program at PSU, and PSU marine ecologist Elise Granek.

They collected tissues samples from freshwater western pearlshell mussels; softshell clams, which are typically found in the upper area of estuaries; and Pacific oysters. They collected them from watersheds along the Oregon coast in 2017 and 2018. These organisms are good indicators of environmental contamination because they are sedentary filter feeders.

The researchers also used special devices to collect pesticides in the water at 16 sites over a month and a half in spring 2019.

“During a rainfall event, you have pulses of pesticides washed from the land that move through the water,” Scully-Engelmeyer said. “Passive water samplers are a way to monitor for these types of exposure.”

The researchers tested the tissues and the water for dozens of pesticides, including herbicides, fungicides and insecticides. They detected 16 different compounds in the bivalves and water, five of which are currently used in forestland management.

They also collected data from the state’s public notification system, which reports pesticides used in state-regulated forestlands, to see if there were relationships between these notifications and the presence of pesticides.

The types and amounts of pesticides varied by site, but all watersheds had at least one of the 12 chemicals that were detected in the bivalves. The most contaminated organisms were from the Siuslaw and Smith watersheds. 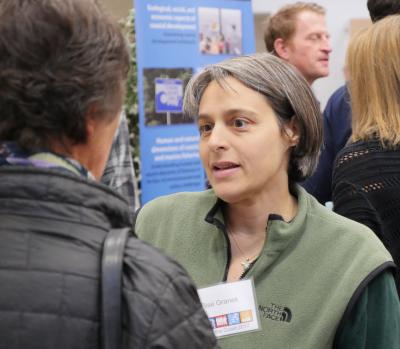 “The levels of the particular compounds we detected are not something that federal guidelines consider harmful to human health; however, they may be harmful to animals in aquatic and marine environments,” Granek said.

She added: “We were just looking at a handful of compounds, yet aquatic organisms and their consumers are likely exposed to many more contaminants, including microplastics and heavy metals. How the exposure we detected — paired with other contaminants they may encounter in their waters — affect the animals sampled or their predators is a really interesting question, and unfortunately we don't have regulatory guidelines that consider exposure to multiple stressors.”

Learn more about the research in this story from 2018.