In 2016, we joined Sea Grant programs across the country to celebrate the 50th anniversary of President Lyndon B. Johnson's signing of the law that made this national coastal and ocean science and outreach program a reality.

That commitment – and an equally important commitment to share the results of our research to help citizens make informed decisions about our nation's marine resources – has been at the heart of the National Sea Grant Program since the beginning.

Early involvement in a national vision 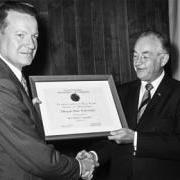 Congress created the NOAA Sea Grant program in 1966 in an effort to bring the kind of national attention and resources to ocean and coastal issues that the USDA's Extension Service had brought to rural agricultural communities since the early 20th century. By 1971, funds for the program had been authorized and appropriated, and on Sept. 17 of that year, Oregon was designated as one of the nation's first four Sea Grant states, along with Washington, Texas and Rhode Island.

Today, Sea Grant programs are found in every coastal state, and Oregon’s is still widely considered one of the very top programs. 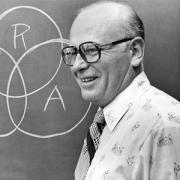 “Bill recognized the potential of establishing some kind of marine program where we would work, not only with the oyster people, but with others up and down the coast who make their living from the sea,” Jacobson recalled in a 2008 oral history interview. “What they told me when they hired me was, ‘You’re going to be an agricultural agent – in hip boots.’”

Changing with the times

Over the decades, Sea Grant has been involved in most of the big issues facing the coast: the rise and fall – and sometimes, recovery – of regional fisheries, the drive to create new seafood products (and the challenges posed by a water-intensive processing industry), and the multiple ways changing economies, resources and demographics have affected coastal people and communities.

Over nearly half a century, Oregon Sea Grant has become a trusted resource for coastal communities, and for state lawmakers and agencies who’ve called on us to help them engage coastal residents on such volatile and timely topics as ocean harvest restrictions, marine reserves and offshore energy development.

With resident Extension faculty stationed up and down the coast; a core of marine educators and aquarists at the (now Hatfield) Marine Science Center; and capable scientists, communicators and administrators on the OSU campus, Sea Grant has become an important part of OSU's research and public-engagement portfolio.

Committed to the future

Today, Oregon Sea Grant works strategically, engaging with multiple collaborators and funding sources to extend and build on its four-decade history of excellence. The program is guided by a strategic plan designed to adjust with shifting regional, national and institutional priorities. New issues – climate change, tsunami preparedness, wave energy – have moved to the forefront, but the program's priorities remain the same.

Highlights Over the Years