Highlights Over the Years

Congress created the national Sea Grant program in 1966 and modeled it after the concept of land-grant colleges, which have been helping farmers and rural communities since the early 20th century. Oregon State University received its first funding from Sea Grant in 1968, but it wasn’t until Sept. 17, 1971, that the university was officially designated as one of the nation's first four Sea Grant colleges. The others that year were in Washington, Texas and Rhode Island. Today, there are 34 Sea Grant programs in the United States under the umbrella of the National Oceanic and Atmospheric Administration. 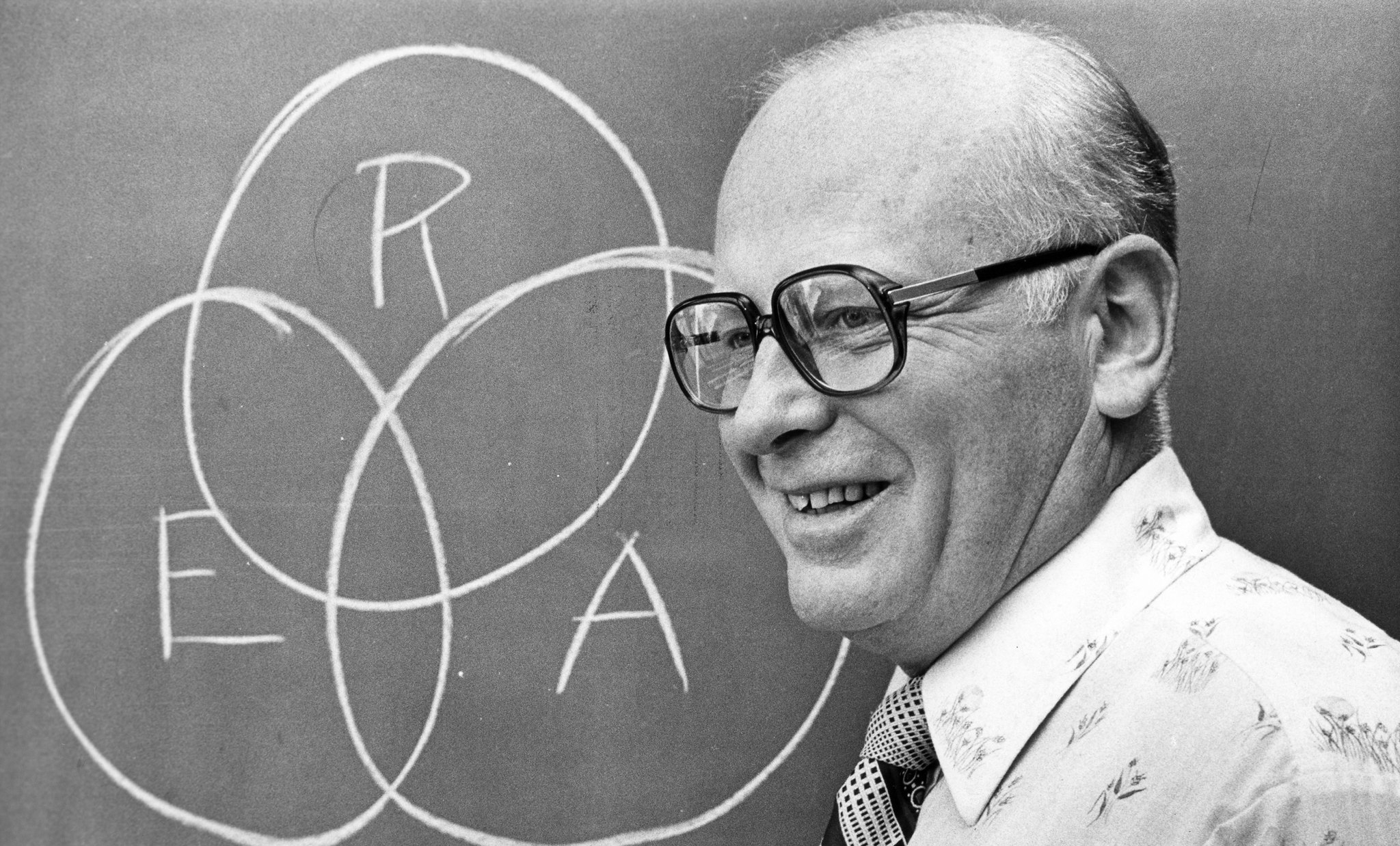 Bill Wick (pictured above) served as the first director of Oregon Sea Grant from 1973 until his retirement in 1990. Born in Wisconsin in 1927, he came to OSU to study fish and game management, earning a bachelor’s degree in 1950 and a master’s in 1952. He was first employed by OSU in 1960 as an Extension agent in Tillamook County, and he later worked at OSU’s marine science center in Newport.

In 1967, Wick hired Bob Jacobson (pictured below on right), a 1963 OSU graduate (and Beavers basketball star), as a marine Extension agent, a job he held until his retirement in 1995. “What they told me when they hired me was that ‘You are an agricultural agent in hip boots,’” Jacobson recalled in a 2008 oral history interview. Early in his tenure, Jacobson covered the coast from Astoria to Brookings, getting to know fishermen, seafood processors, port commission folks and others, asking them, “What is it that I can do for you?” 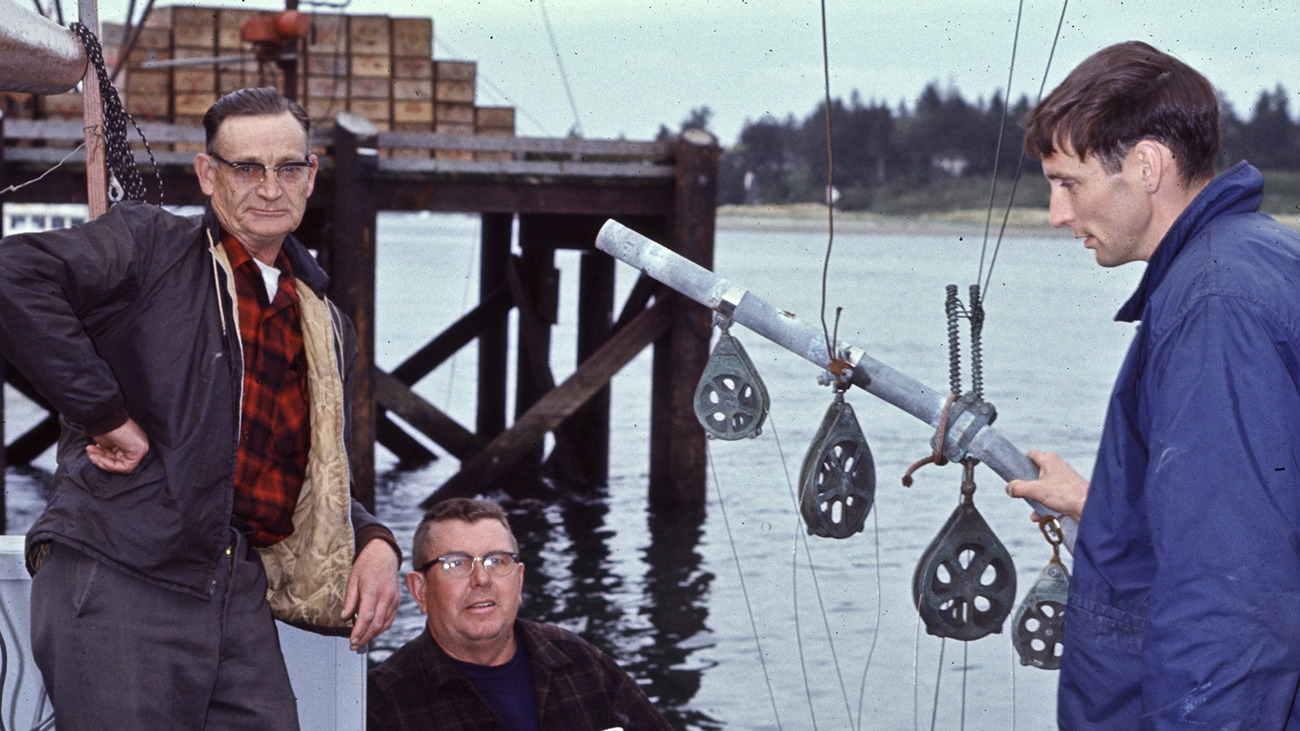 That’s exactly what Oregon Sea Grant has been doing ever since – whether it’s our funded researchers providing policymakers with data on crab populations; our Extension specialists asking the state’s seafood industry what they need to weather the COVID-19 pandemic; or our educators helping teachers bring marine science into their classrooms.

Over the last 50 years, we’ve been involved in many of the big issues facing the coast. We highlight a few of them here, but we invite you to take a deeper look by perusing our:

You can find a slightly condensed version of the content on this webpage in this printable, two-page PDF. 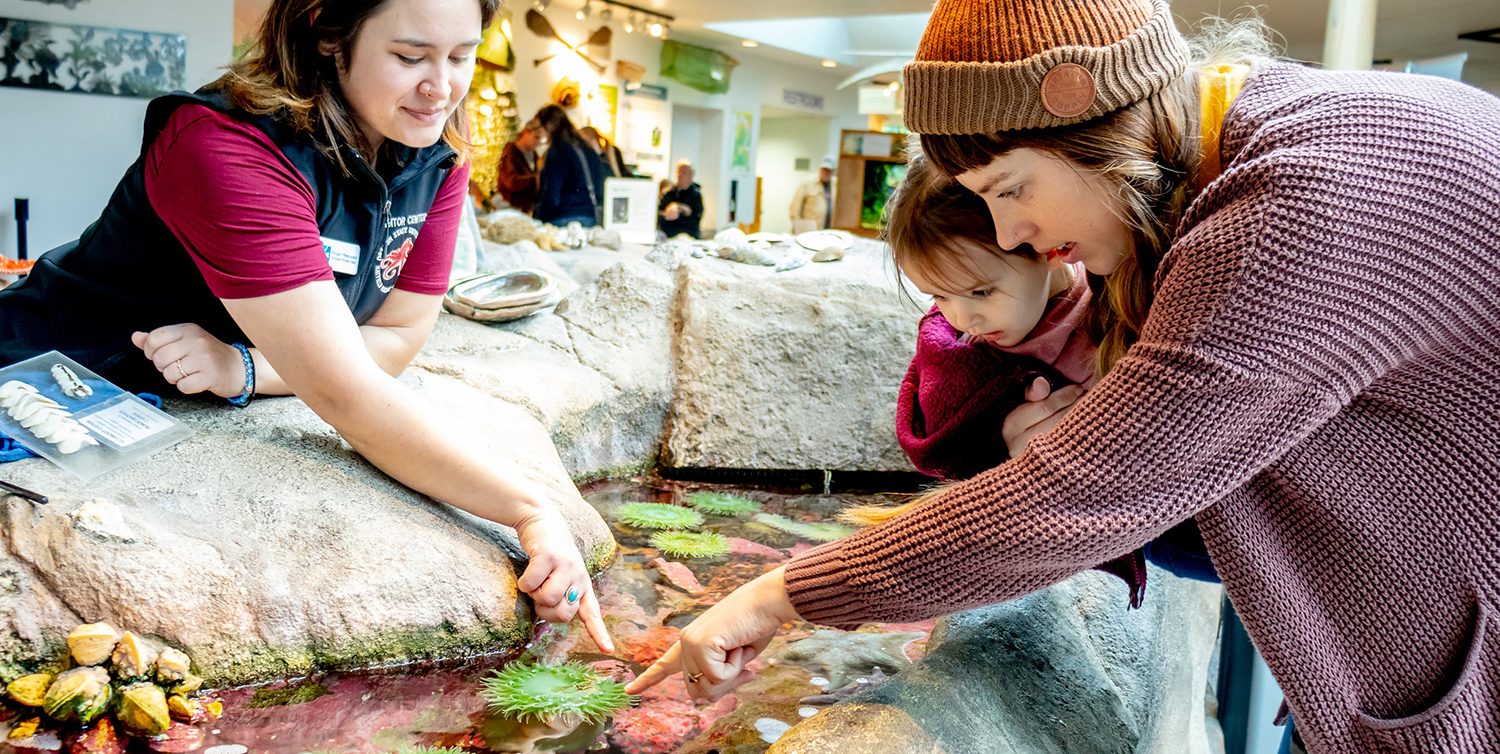 In the early 1970s, Oregon Sea Grant (OSG) led the creation of the Seatauqua program, which grew to include talks, nature walks, workshops and films. In 1978, we created Whale Watching Spoken Here, now run by Oregon State Parks. In 1997, we began managing the Visitor Center at the Hatfield Marine Science Center. It’s one of the local facilities where, under the tutelage of our aquarists, community college students gain experience in caring for animals. It’s also where, in the early 2000s, we began studying how people learned from exhibits as part of our focus on free-choice learning. That focus included helping to fund a professorship in the subject and develop a graduate program that has produced research projects nationally and internationally.

Since the 1970s, OSG has also been helping teachers bring marine science into their classrooms – ranging from our 1980s guide to marine education in Oregon to our 2020 workshops on marine debris. For the past decade, we’ve been sponsoring an annual underwater robotics contest that prepares students for technical careers. When the coronavirus hit, our career days were converted into webinars. Since 2014, we’ve been running the annual State of the Coast conference.

With Pacific salmon on the decline, scientists in the 1970s and 1980s studied their reproduction, distribution, predators and viral and parasitic diseases. In the late 1990s, we began funding nearly a decade of research in the Salmon River Estuary that pioneered concepts for evaluating how salmon respond to restored wetlands. In 2004 and 2005, we published reports on how tide gates affect salmon and other fish, and in 2006 we co-sponsored a symposium on the topic. After restrictions were imposed on salmon fishing off Oregon and California in 2006 to protect Klamath River chinook, OSG teamed up with Oregon fishermen to collect genetic samples from salmon in the ocean to determine their river of origin. 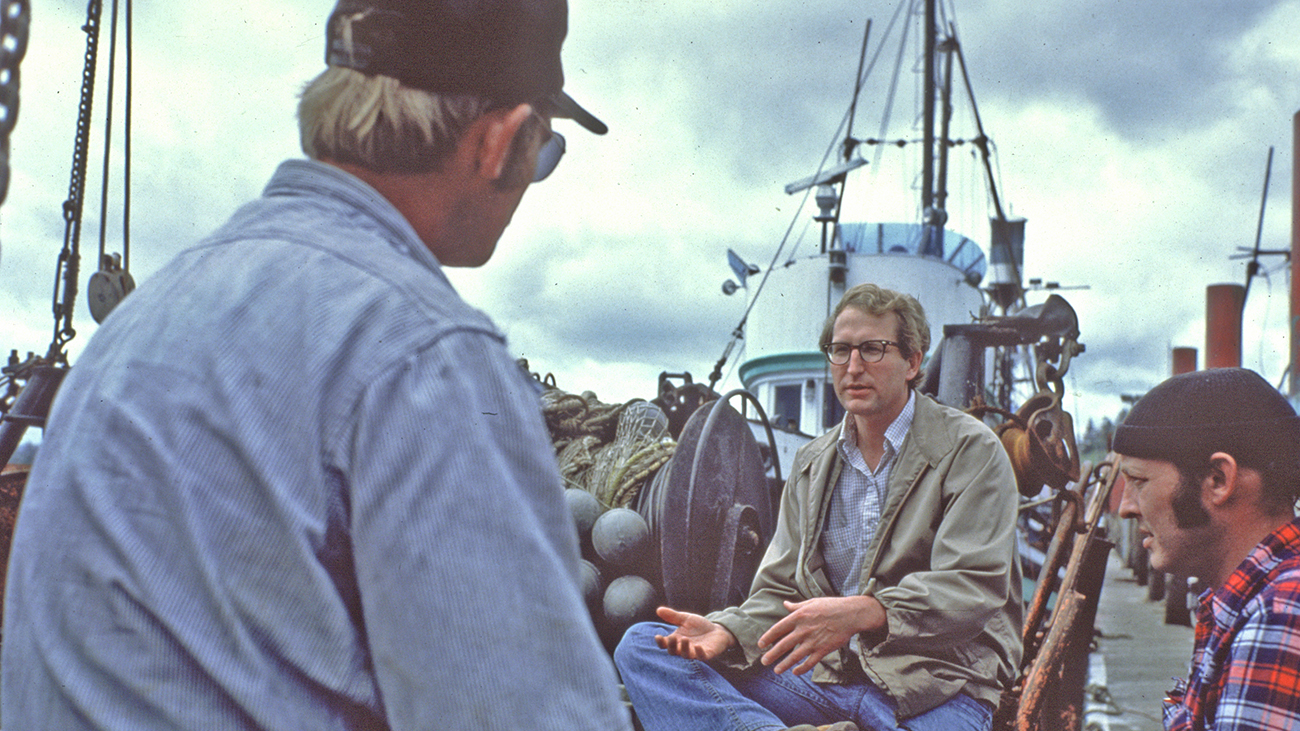 In the 1980s and 1990s, we funded research that aimed to find a way to turn Pacific whiting into surimi, a paste used to make imitation crab flakes and other products. We worked on getting processors set up, and we contributed to a 1991 report for the Oregon legislature about the feasibility of a Pacific whiting industry. In 1992, we helped convene a meeting about harvesting, processing, marketing and quality assurance. After the West Coast groundfish industry collapsed in the late 1990s, we helped design a program to assist people in signing up for financial aid, health insurance, food stamps and job retraining. By 2004, the program had reached an estimated 1,500 people. 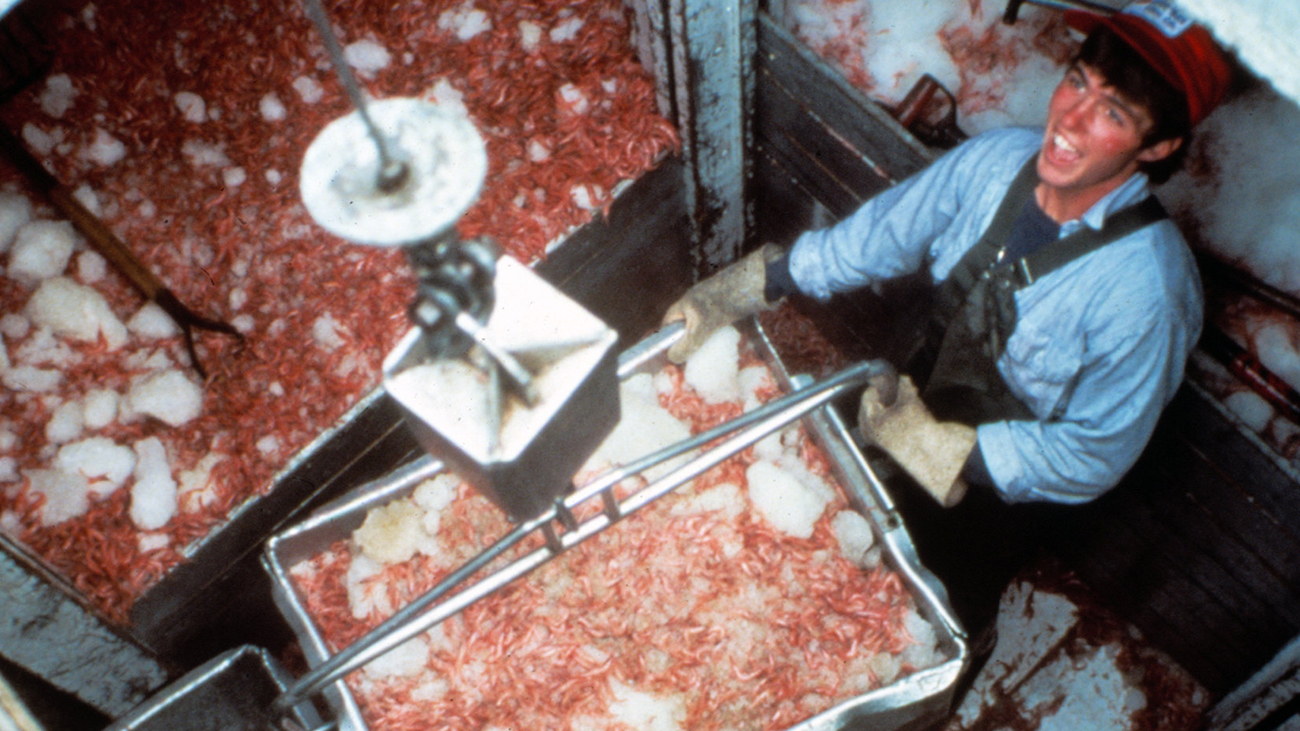 But our focus hasn’t just been on finfish. Research in the 1970s determined the best spray rate to cool harvested Pacific pink shrimp, and another study analyzed the economic costs and benefits of using machinery to process them. More recently, researchers looked at how ocean acidification affects young pink shrimp and oyster larvae, and they aimed to understand how the West Coast shellfish industry viewed this change in ocean chemistry. 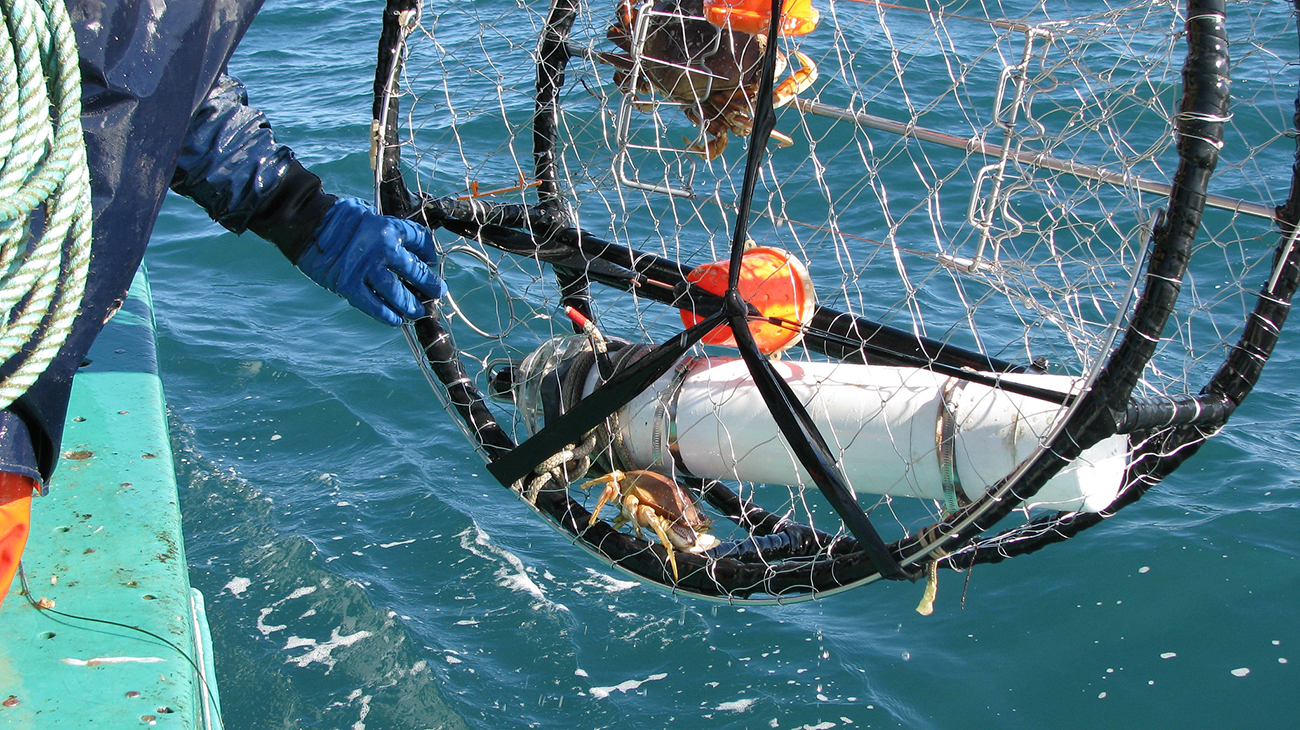 In 2002, the Scientists and Fishermen Exchange program was launched to help these two groups collaborate on research. By 2010, more than a dozen vessels were participating in projects, which included attaching oxygen and temperature sensors to crab pots. After fishermen off Oregon pulled up pots of dead crabs in 2002 and 2006, OSG began funding research to better understand low oxygen in the ocean and its effect on fish and crabs. Starting in 2006, we became involved in efforts to help crabbers retrieve lost pots, which can endanger wildlife. Today we’re supporting efforts to prevent whales from getting entangled in fishing gear. 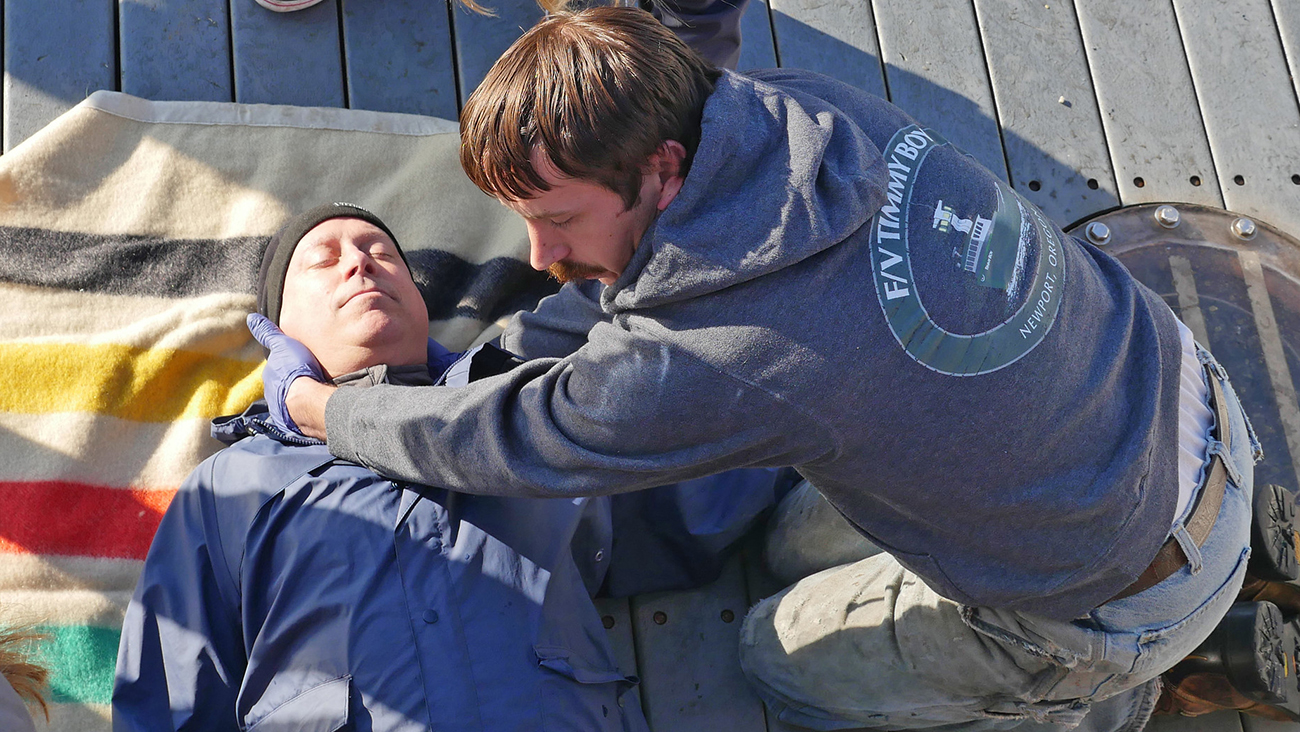 Early on, safety at sea became a priority. In the 1970s, we helped the fleet obtain hundreds of neoprene survival suits, and we taught fishermen how to put them on. Today we’re teaching them first aid. 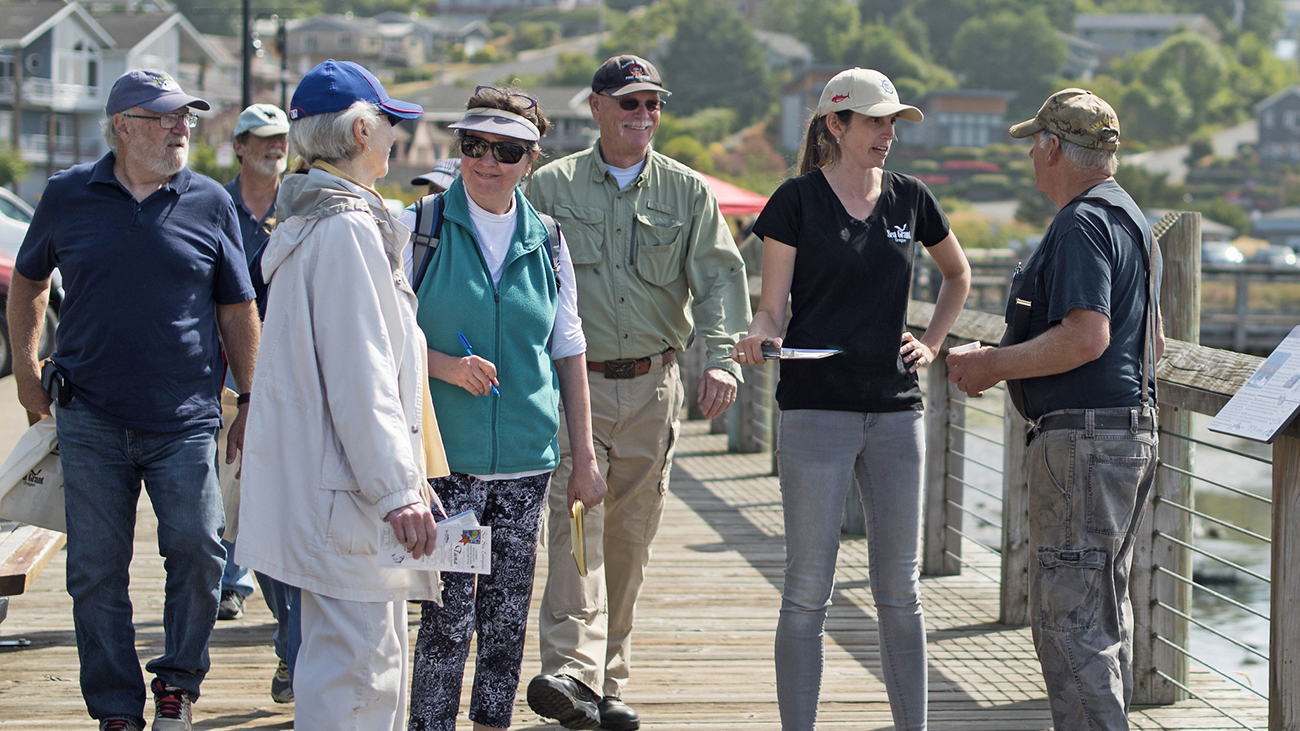 On the seafood marketing side, OSG has produced videos and led tours that show consumers how to buy seafood from fishermen, markets and tribal vendors. We were also involved in the development of a barcode scanning system called Fish Trax that tells shoppers where fish came from, who caught it and when. Additionally, we’ve helped small seafood processors bring products to market by offering technical advice and helping them use innovative packaging. During the COVID-19 pandemic, a digital media campaign encouraged people to #EatOregonSeafood.

OSG helps shape the next generation of natural resource managers, scientists and environmental stewards by administering paid internships and fellowships. In the last few years, we’ve made it our mission to increase the diversity of applicants. Since 1980, we’ve helped place over 60 early-career professionals from Oregon universities in federal offices in the Washington, D.C., area through Knauss fellowships. In 2017, we began partnering with Oregon’s Department of Environmental Quality on an internship program that has placed more than three dozen interns with about 30 Oregon businesses to help the companies reduce waste and energy use. 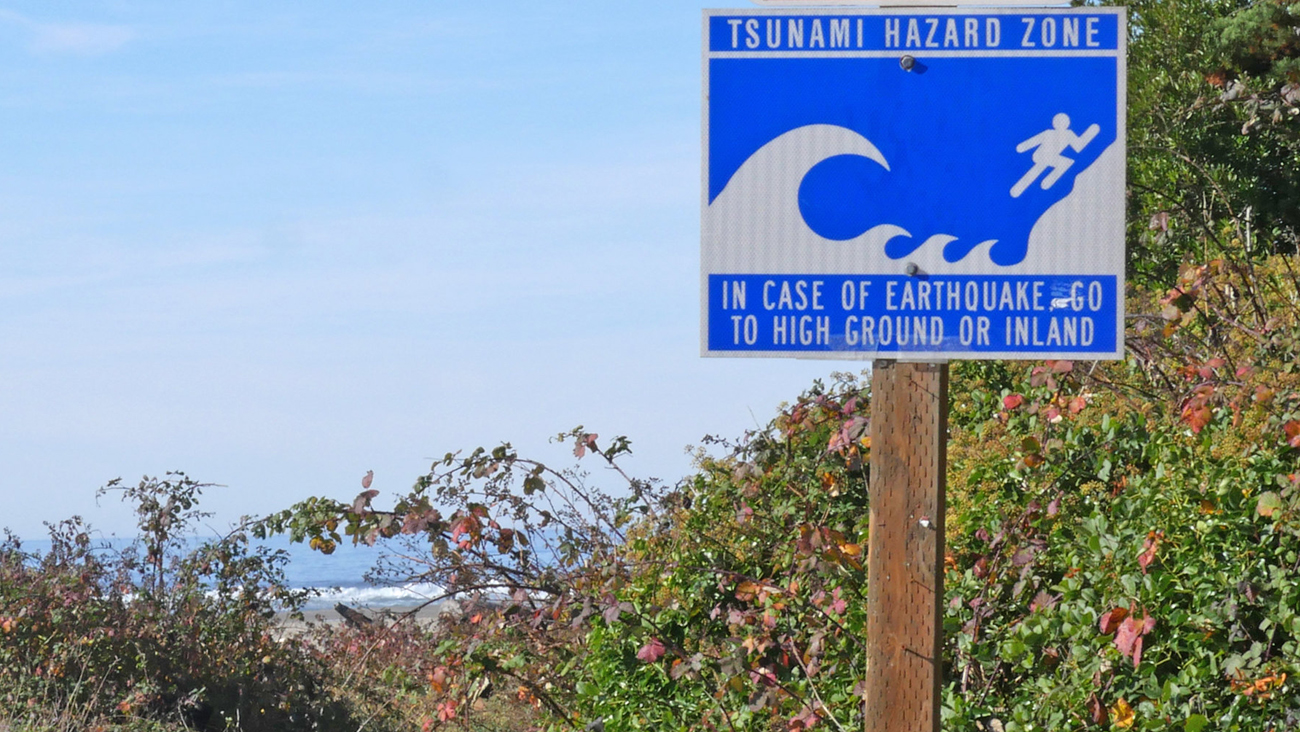 For decades, OSG has been helping people prepare for earthquakes, tsunamis, erosion and sea level rise. In 1980, we helped produce a document to inform property owners about coastal hazards. In 1991, we co-sponsored a conference of over 160 people, which led to our helping produce a 1994 report that offered nearly 80 recommendations for addressing coastal hazards. We also helped create an iconic sign that warns people when they’re in a tsunami zone. Other outreach has included hands-on exhibits, classroom activities, brochures, videos and clue-directed walks, which lead people to higher ground. Additionally, we’ve supported research to understand perceptions of earthquakes and tsunami issues and estimate economic losses and mortality rates. 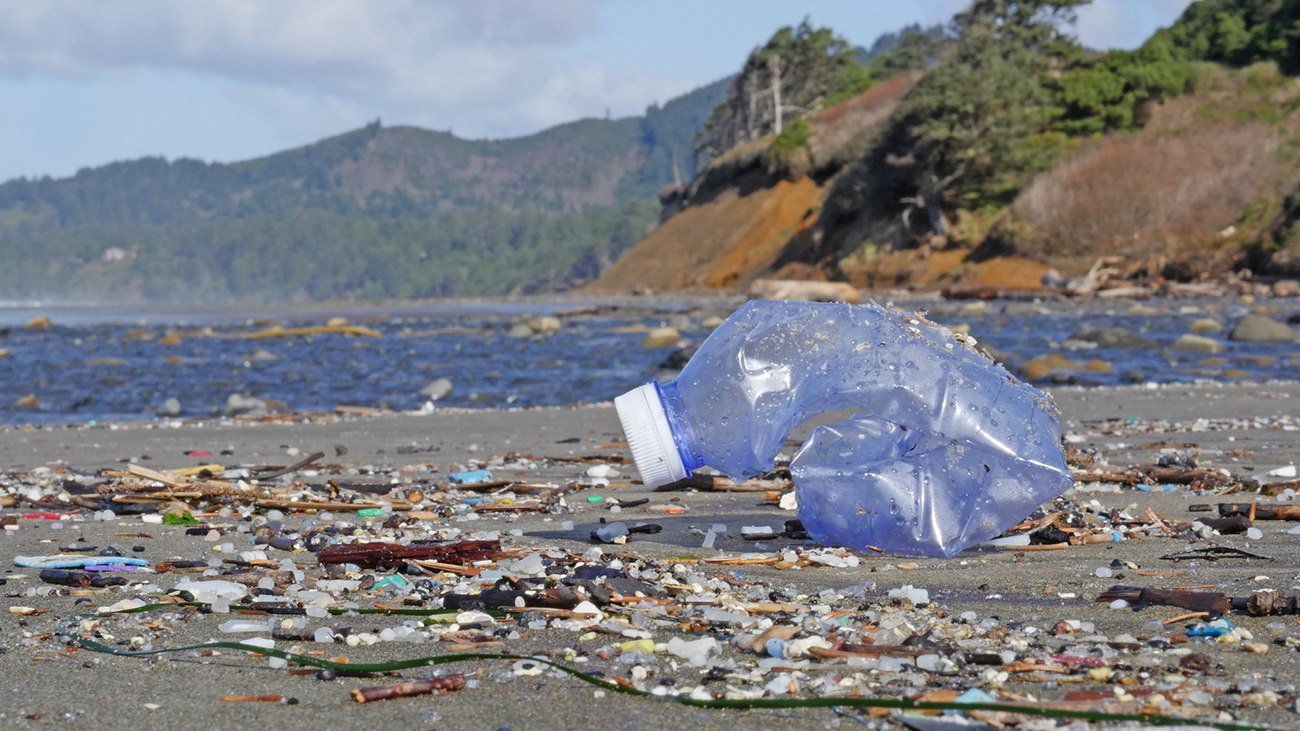 After debris washed up on Oregon’s shore from the 2011 Japanese tsunami, OSG educated the public about nonnative sea life hitchhiking on it across the ocean through a video, exhibit and field guide, and we funded research on algae, fish and other organisms on the debris. We also collaborated on a project to track the movement of debris; co-founded a team to enlist volunteers to clean up beaches; and implemented various actions in Oregon’s marine debris plan. Other efforts have included informing people about the risks of lost fishing nets, and funding a study on Steller sea lions entangled in plastic strapping and other items. We’ve compiled lesson plans on marine debris, and in 2017 we helped plan and facilitate a workshop to prioritize research to address the problem. We also helped fund an exhibit and a middle school curriculum on microplastics as well as research that found these tiny synthetics in oysters and razor clams. 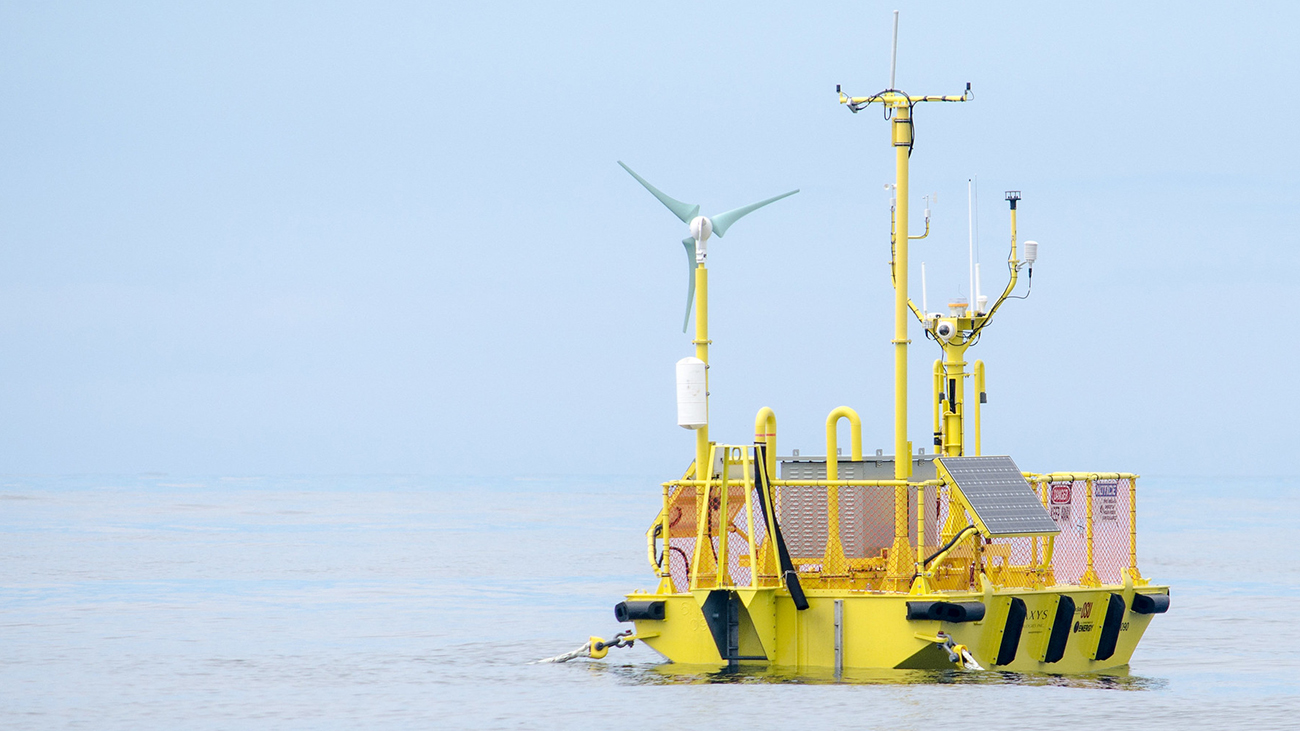 In the early 2000s, OSG funded a study to assess how much electricity could be generated by waves off the Oregon coast. We helped organize public forums in 2009 and 2012 to discuss the prospect of wave energy development, and we funded research to evaluate the process that led to the selection of a testing site. OSG also supported sociological research and helped identify potential conflicts over the use of ocean space and ways to avoid them. Our videos, fact sheets and exhibits have informed people about wave energy, different technologies to convert it into electricity, and their possible effects on the environment and sea life. We also created materials to teach students about OSU’s wave energy research and how to build a model-sized wave energy device.