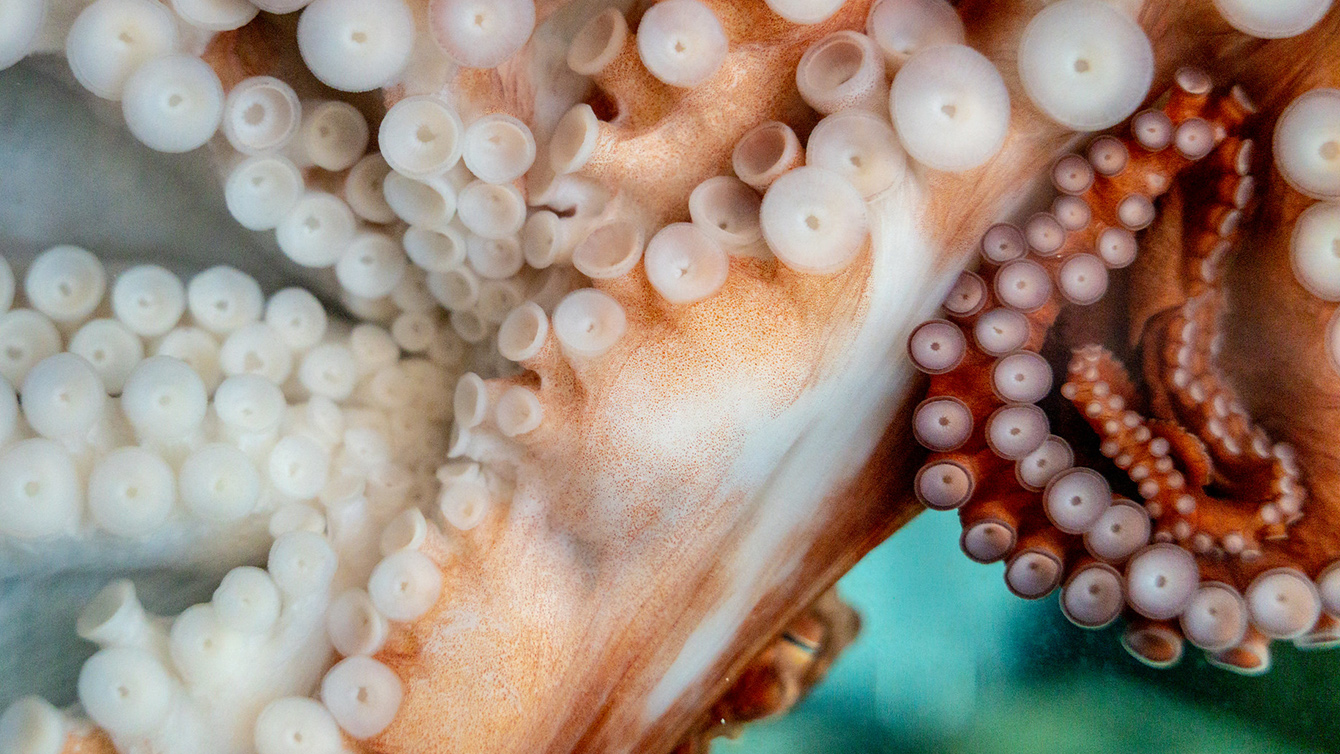 Answers to some of the questions visitors ask about our giant Pacific octopus:

Q. How big is the octopus?

A. In the wild, this species of octopus averages around 110 pounds at maturity, with an arm span of about 16 feet - although much larger specimens have been recorded, making this species a contender for the title of world's largest octopus!

Q. Where do they come from?

A. The giant Pacific octopus (Enteroctopus dofleini) is widely distributed throughout the North Pacific. Ours have often come from the waters off Newport, often donated by crab fishermen who find them clinging to their crab pots.

Q. What do they eat?

A. We feed them fish, squid, and sometimes clams or mussels. 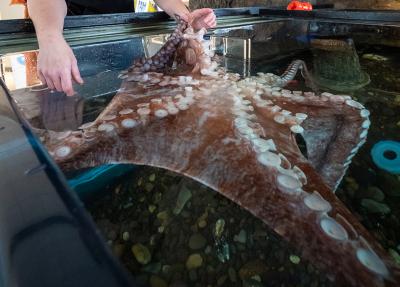 Q. Is the Giant Pacific Octopus' venom hazardous to humans or just other marine wildlife?

A. Yes, the venom is hazardous to both humans and marine life - hazardous, but not deadly to humans. The giant Pacific octopus's beak could certainly deliver a nasty wound; the venom if injected into the wound could slow down the healing process; and bacterial infection would always be concern, but deadly, not likely. Two other species of octopus - The Antarctic octopus and the blue-ringed octopus (found mainly off Australia and New Zealand) - do have venom that can be lethal to a human.

Q. How does the octopus change colors, and why?

A. The octopus skin contains tiny pigments known as chromatophores which the animal can expand or contract to change colors and blend in with its surroundings. That gives it good camouflage when hunting for its food – or trying to avoid becoming somebody else's food! In the tank, we find that the octopus also changes color when it gets excited by something – such as dinner!

Q. Is this octopus a boy or a girl? How can you tell?

A. Mature males can be identified by the modified tip of their third arm on the right, called a hectocotylus, which is used in reproduction. 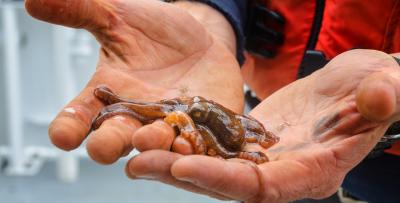 A. They lay eggs about the size of a grain of rice, and the baby octopuses are about that size when they hatch. One female can lay up to 100,000 eggs at a time, and will then protect them until she dies, but only a very few of the babies survive to become adult octopuses.

Q. How long will the octopus live here?

A. Typically for six months to one year. We try to release the octopus before it shows signs of senescence (old age). In females, that's when they start laying eggs; for males, it's when they show white around their eyes, develop white lesions or stop feeding. Giant Pacific octopuses live an average of 3-5 years.

Q. What happens to them then?

A. We release the octopus into the ocean as soon as possible to give them a chance to mate, and we usually have a new octopus waiting in the Animal Husbandry wing. 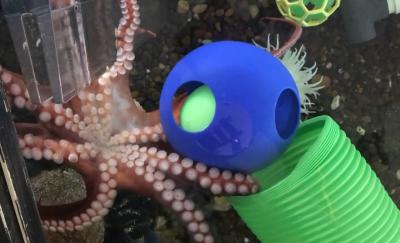 Q. Why doesn't your octopus have some toys and things to keep him/her amused? (Web visitor Kelly E.)

A. They do! Our husbandry team goes to great lengths to provide our octopuses (we usually have one or two more behind the scenes) with enrichment of some sort every single day. At times, you might see a Mr. Potato Head (TM) disassembled in the tank, and we occasionally give the animals their food inside a plastic jar or toy so they can figure out how to open it and get a treat. It's amazing how quickly these creatures figure out puzzles presented to them. Finally, on a daily basis, someone on-staff is physically interacting with the octopus with gentle touches and strokes.

Q. Why do you keep the tank so bright all night long? It is my novice understanding that an octopus ... might not enjoy 24 hours of lighting. (Web visitor Sarah G.)

A. Yes, octopuses are nocturnal animals. The lights in and around the tank are dimmed at night, and when the tank is covered, it's actually quite dark inside - but our Webcam can "see" in the dark! It automatically switches to infrared mode when the lights go down. That's why the picture is less colorful at night (or when lots of visitors crowd around the tank during the daytime), and why the bubbles from the seawater pump are so visible then, too.

Q. What are the other animals I see in the tank?

A. The octopus shares its tank with a variety of sea anemones - the same kinds of invertebrates found in its natural habitat.

Q. Why doesn't the octopus eat the other animals?

A. Sea anemones have their own self-defense - their waving tentacles contain tiny stinging cells that deliver a mild shock-like sensation when the octopus touches them, which is enough to make the octopus leave them alone. 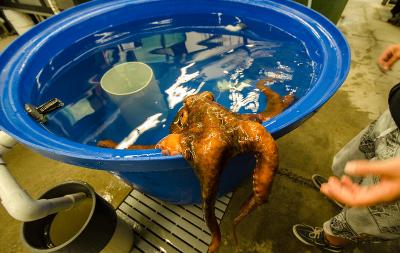 Q. Are the rocks in the tank real or artificial? (Web visitor valdary)

A. They're artificial, made from cast concrete with slots in them to allow seawater circulation. That prevents anoxic (low-oxygen) areas where harmful organisms might breed.

Q. All I see on the OctoCam is bubbles and glare! The camera angle is all wrong! I used to be able to see the octopus and now I can't! What's wrong?

A. Getting a decent underwater view of the octopus tank can be quite a challenge. Our original octocam was placed inside the tank, which required building a special waterproof - and octopus-proof - housing, and a lot of trial and error learning to position the camera so it didn't block the seawater intake, didn't catch glare from the Visitor Center windows, etc.

Unfortunately, the housing developed leaks, and corrosion from the salt water put the camera out of commission. We also worried that it might put traces of metals and chemicals into the tank which could harm the octopus.

For this reason, we moved the camera out of the tank, in a visitor-proof housing. The camera lens is flush against the tank wall to minimize glare - but that also limits our ability to adjust the angle for the best view of the animal.

We'll keep tinkering, and our technical team has some ideas that could improve viewing. Meanwhile, it's still possible to see the octopus if you're persistent - and feeding time is always a good opportunity. Thanks for your patience!

Q. Who's paying for this? Can I help?

A. The Visitor Center relies on donations to support all our operations. Visitor contributions make it possible for us to create unique opportunities for science education - from exciting new exhibits such as the OctoCam to the Oregon Coast Quests program and our many classes and camps for young people and families. We encourage people to donate when they visit the Center; for other ways to support our science education mission, visit our Join & Support page..

Q. What kind of camera are you using inside the tank? How do you keep the octopus from taking it apart?

A. (Note: This describes our original camera; we plan to update soon). The original camera was a Lorex CVS 1000 submersible webcam. The feeds are encoded by two Osprey 210 encoder cards (640x480, 500 kbps), broadcasted using Adobe Flash Video Encoder 3.2 from a local PC, and then sent to Oregon State University Media Services streaming servers for distribution to the Internet. The camera has infra-red capability that lets it continue to transmitting images even when light in and around the tank is low.

Octopuses are curious, smart - and strong. They're able to take apart even the smallest mechanical component, and seem to do so simply to entertain themselves. It was a challenge to come up with a housing that would protect the camera from the octopus - and vice-versa. Most commonly available hardware is made of metals that break down in seawater and could poison the octopus and his invertebrate tankmates.

So our OctoCam team had to get creative.They designed a special camera housing from a stainless steel electrical box, coated with a special marine-grade powder coating and bolted together with non-toxic nylon so the octopus couldn't take the camera apart. That worked well for the first few years of the Octocam, but seawater eventually seeped inside and corroded the camera, raising concerns about possible toxicity for the animals.

The camera was subsequently moved outside the tank and mounted with its lens flush to the wall to eliminate glare. Although pretty securely bolted in place, the camera housing sometimes serves as a tempting stepstool for very young visitors, and can get knocked off kilter. We try to monitor it and adjust the position and focus as necessary.

The other challenge is getting a camera angle that will allow visitors to see the octopus as often as possible without glare from the large windows and skylights in the area near the tank. We continue to tinker with the camera location to give you the best possible look at our resident octopus, so if you don't see the animal on this visit, please come back soon and try again.

The live stream is hosted on Ustream by OSU Media Services in Corvallis, with Raul Burriel in charge of the OctoCam project's development. The camera's amazing popularity from the day it was launched initially pushed the system to its limits, but Raul and his team quickly responded by switching to a one-gigabit connection, increasing the server's capacity 10-fold and reducing the chance that high visitor load would overwhelm the servers. More recently, switching to the Ustream commercial video server has improved stability and quality even further, and raises new possibilities for distributing the live feed via Ustream TV.

Do you have a question you don't see answered here? Contact us!