When are you open?

We are currently open the following days and times: 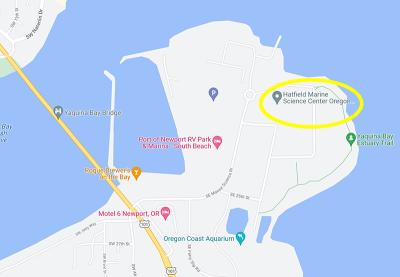 We are located on the Hatfield Marine Science Center campus, which is located in the South Beach area of Newport (near the Oregon Coast Aquarium). Access Google Map directions here.

Traveling South on US 101

Traveling North on US 101

How much does it cost to get in?

Currently we are charging $3 for visitors ages 5 and up; payment can be made online when you make your reservation. Visa or MasterCard are accepted, no cash, please.

Is the Visitor Center accessible to people with mobility, vision and hearing impairments?

The Visitor Center is wheelchair accessible. We make every effort to accommodate visitor needs. Feel free to contact us before your visit to ask about accommodation.

Can I bring my pet?

Sorry, but the only outside animals allowed at the HMSC are trained assistance and guide animals, including those in training. Please leave your pets at home or at your lodging; leaving them in your car while you tour the center is never a good idea, and during warm weather it can be deadly.

Where can we eat lunch?

While there are no dining facilities or covered eating areas at the Visitor Center, there are outdoor benches and short concrete walls near our entrance, where you can sit and eat the lunch you brought, weather permitting. Chaperones should remain with student groups while eating. There are outside garbage cans for your cleanup, but large groups should notify us in advance so we can provide additional cans.

The Oregon Coast Aquarium has a covered picnic table area in their parking lot, available on a first-come, first-served basis. Two nearby State Parks have day-use areas with picnic tables and restrooms (though neither has covered areas for large groups):

HMSC has 100 mbps of fiber-optic connection available for wireless access to the Internet. The Guin Library has a public wireless network as well as five computer terminals available to the public.

What Can We See and Do?

When is the octopus fed?

Watching our resident octopus being fed is one of the most popular activities at the Visitor Center. The animals do not eat every day, though, and the schedule varies from season to season, so check the current feeding schedule.

Is there a schedule for films?

While we occasionally schedule special films, visitors can also choose from more than 100 natural-science videos on subjects such as marine mammals, birds, intertidal animals, fish, coastal hazards, marine ecosystems, research and global issues. Videos range from six to 60 minutes long and are available for viewing most of the time. We also offer a wide variety of videos and presentations that are especially good for visiting school groups. Check with us when making arrangements for your group's visit.

How long does it take to see the Visitor Center?

That depends on what you want to do! You can see all our indoor exhibits in about an hour; plan to stay longer if you want to explore the outdoor Yaquina Estuary Trail or pursue an Oregon Coast Quest.

Are other parts of the HMSC open to the public?

The Guin Library is open to the public 8 am to 5 pm., Monday through Friday, except for major holidays. You can use this extensive library collection of marine and estuarine books and magazines. There’s even a section of children’s books.

During the summer, and occasionally at other times of the year, we offer guided tours of our animal husbandry area and other behind-the-scenes activities. You can also book a special tour for your group, for a small fee. If you're bringing a group of 12 or more to the Center, please call ahead to book your tour.

Other facilities, including the HMSC research facilities, are working laboratories and open to the public only by invitation or on special occasions.

Can I take pictures? How about videos?

Feel free to photograph our exhibits and animals, but please don't use a flash when photographing the octopus. In fact, you may get better pictures of many exhibits by disabling your flash to eliminate glare from the aquarium tanks. Public demonstrations and lectures can be videotaped with prior permission from the presenter.

Our Exhibits and Animals

How cold is the water in the aquarium tanks? Where does it come from?

A flow-through life-support system is used to maintain most of our aquatic animal exhibits. This water is constantly being pumped into the tanks, and an equal volume of water is flowing back out, carrying fish waste back to Yaquina Bay. The HMSC facilities pump water straight from Yaquina Bay into holding tanks during high-tide periods. The water is filtered slightly before it enters the Visitor Center. The best part of this system is having a constant supply of seawater on demand and typically at the appropriate temperature to maintain the exhibit animals indigenous to this area. Yaquina Bay water temperature fluctuates between 11oC (51.8oF) and 16oC (60.8oF).

Do you have special permits to capture and display marine animals, and to use them in your education programs?

Yes. All marine organisms collected and transported live for the purpose of education and/or holding are subject to state and federal regulations and require a collecting permit. Specific information about collecting permits issued to HMSC and other organizations can be found at the NOAA Authorization and Permits for Protected Species (APPS) website.

Is that the same octopus I saw last time? How often do you change the octopus? Where do they come from, and what happens to the current octopus when you get a new one?

Of the hundreds of animals we have on display, the giant Pacific octopus seems to be a visitor favorite. Many who come back to the Visitor Center after a year or two are surprised to find a different animal on display.

Our octopuses come straight from the Pacific waters off Newport, where they are quite common. Sometimes our aquarium staff catches them (they know where to look); occasionally local fishermen bring us an octopus they've brought up with their catch. The animals go through a period of adjustment in our animal husbandry labs to make sure they're healthy before we put them on public display.

Typically, an octopus stays on display for six to nine months, depending on how well it is eating, how well it handles captivity, and how big it gets (they grow quickly!). When we replace a healthy octopus, we release it back into the bay.

Near the end of its three- to five-year life, the giant Pacific octopus goes through a senescent stage before dying -- the males after mating, the females while brooding eggs and after the eggs hatch. Sometimes we notice signs of senescence in the octopus on display; it stops eating, its movements become uncoordinated, etc. When that occurs, we replace the animal as soon as possible.

Who designs the exhibits? Are the exhibits designed for kids only or both kids and adults? Do you ever get feedback from kids on what exhibits they like/dislike?

We design the exhibits at the Hatfield Marine Science Center in-house with a small exhibit-design team. We will often work with community members and researchers/scientists to assist with content areas. All of the exhibits go through a prototyping process and a formative evaluation. The exhibits are designed for families and intended to promote social (group) learning.

Why are there tsunami warning signs? Is a tsunami likely to happen here?

While tsunamis do not happen frequently, they are likely sooner or later all along the Pacific coastline. Our warning signs are part of a larger effort to alert coastal communities and visitors to that possibility and teach them what to do if one should occur.

The HMSC is susceptible to a tsunami because it is located close to sea level and sits on top of dredge spoils that make up much of the South Beach area. In the case of a near-shore quake, the earthquake itself is your warning; it means a tsunami could strike in a matter of minutes. If you feel the earth shake, walk quickly (don't drive) to the nearest high ground (near the south end of the bridge - see the HMSC evacuation map).

Are the urchins in the touch tank poisonous?

The two local varieties (purple or red urchins) we have in our touch tank are not poisonous to people. However, punctures caused by their spines can get infected. Be careful when handling them, and wash your hands well afterward.

What's that ship docked in front of the Visitor Center?

The HMSC serves as the home port for OSU's research vessels, the Elakha, the R/V Pacific Storm, and our newest addition, the R/V Oceanus. Other vessels come and go; the Visiting Ships calendar usually lists visiting vessels.

In 2011, the National Oceanic and Atmospheric Administration's Pacific research fleet joined the HMSC vessels in Newport with the completion of its new, state-of-the-art Marine Operations facility and dock, located nearby.

I found something weird on the beach. What is it?

All kinds of interesting things, natural and human-made, wash up on Oregon's beaches. To learn about some of them, download the free Oregon Sea Grant publication Flotsam, Jetsam, and Wrack in illustrated .pdf format.

If that doesn't answer your question, check our Ask A Scientist page!

I would like to be a marine scientist when I grow up. How can I learn more? Can I come job-shadow one of your scientists?

For a great overview of marine science careers and some of the people who pursue them, visit the Sea Grant Marine Careers site. While we are unable to grant the many job-shadow requests we get, we do offer high school-aged students a chance to meet and work with scientists through our Career Day marine education programs.

From a boat or the public pier, during crabbing season. Please don't try crabbing off the HMSC dock; it is reserved for research vessels and off limits to the public except during special events featuring vessel tours.

Where can I collect shellfish/clams? Do I need a license?

Clams can be collected along almost any sandy, flat stretch of beaches, but not in a state park or any other type of reserve. Cockles are found in Yaquina Bay in rocky areas such as Coquille Point, across the bay. Yes, you must have a shellfish license to collect.

How do I know if it’s safe and legal to collect shellfish?

For more information about crabbing, clamming and how to catch and prepare other food from the sea, see Oregon Sea Grant's free online publications.

What seafood is in season? And where can I eat some?

The Lincoln County Sea Grant Extension agent puts together an annual "What's fresh and when?" guide to Oregon's commercial seafood seasons. Dates change from year to year, depending on the supply and fishery management decisions.

‹ Visit Us up Exhibits ›