The squid dissection program is designed to be a 50-minute lab-based exercise for 4-12 grade students.  It examines the external and internal morphology of the California market squid. Students will learn about the classification of mollusks then work in pairs, following the directions of their marine educator, to systematically dissect a thawed squid and explore the many adaptations they have for survival in the marine environment.

Squid are invertebrates, meaning they lack a true backbone, in the phylum Mollusca, which includes a variety of organisms including clams, snails and limpets. They are in the class Cephalopoda (which translated means “head foot”) along with octopus, cuttlefish and nautilus.

Squids are the most highly developed and largest invertebrates on Earth. There are hundreds of different species that are distributed throughout the world’s seas, from the shallowest waters of our coastlines to the deepest portions of the ocean. As juveniles and adults, these creatures are preyed upon by numerous species of fish, birds, marine mammals and even other squids, and form a very important link in oceanic food webs. There is also a large commercial fishery for squid as they are prized by humans as calamari and used by recreational fishermen as bait.

Because they are preyed upon by so many other organisms, squid have developed a number of specialized adaptations that help them avoid predators. Squid are adept swimmers with several adaptations that allow them to move swiftly through the water. Squid have a siphon that provides jet propulsion and fins to provide stability and direction when swimming. In fact, squids are the fastest swimmers among the invertebrates with some species reaching speeds of up to 25 mph.

Squid also possess chromatophores, specialized structures on their skin that contain pigment and allow them to change color rapidly. These chromatophores can provide camouflage for squid from predators and potential prey, but are also believed to be used for identification purposes and communication between squid. Squids also have an ink sac that can be used to produce a dark cloud in the water, thus confusing predators and allowing the squid to make their escape. 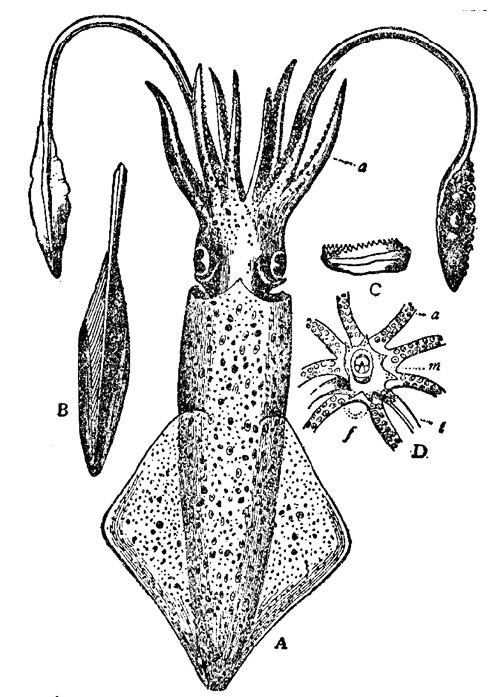 Squid are soft-bodied animals with eight arms and two longer tentacles. These are equipped with suckers that are used in feeding. Some species of squid also possess hooks on their appendages thought to be used in defense and feeding.

Although squids lack an external shell, they do have remnants of an internal shell, called a pen because of its unique shape. This shell provides the otherwise soft body of the squid with rigidity and helps maintain body shape.

Squids reproduce sexually with females producing eggs and males producing sperm. Squids go through elaborate courtship displays with males passing sperm packets to the females, who then deposit hundreds of gelatinous eggs on the ocean, often in communal areas. Unlike octopi that guard their eggs after laying them, female squid die shortly after laying their eggs. Research has shown that these eggs are inoculated by a female squid with a host of bacteria that act as a microbial agent to prevent against disease and also seem to deter predators.


Lesson Plans:
The Cephalopod Page
The Cool Communication of Cephalopods

Grade 4
4.1 Structure and Function: Living and non-living things can be classified by their characteristics and properties.
4.1L.1 Compare and contrast characteristics of fossils and living organisms.
4.2 Interaction and Change: Living and non-living things undergo changes that involve force and energy.
4.2L.1 Describe the interactions of organisms and the environment where they live.

Grade 5
5.1 Structure and Function: Living and non-living things are composed of related parts that function together to form systems.
5.1L.1 Explain that organisms are composed of parts that function together to form a living system.
5.2 Interaction and Change: Force, energy, matter, and organisms interact with living and non-living systems.
5.2L.1 Explain the interdependence of plants, animals, and environment, and how adaptation influences survival.

Grade 6
6.1 Structure and Function: Living and non-living systems are organized groups of related parts that function together and have characteristics and properties.
6.1L.1 Compare and contrast the types and components of cells. Describe the functions and relative complexity of cells, tissues, organs, and organ systems.
6.2 Interaction and Change: The related parts within a system interact and change.
6.2L.1 Describe the relationships and interactions between and among cells, tissues, organs, and organ systems.
6.2L.2 Explain how individual organisms and populations in an ecosystem interact and how changes in populations are related to resources.

Grade 7
7.1 Structure and Function: Living and non-living systems are composed of components which affect the characteristics and properties of the system.
7.1L.1 Compare and contrast sexual and asexual reproduction. Explain why reproduction is essential to the continuation of every species.

Grade 8
8.1 Structure and Function: Systems and their components function at various levels of complexity.
8.1L.1 Explain how genetics and anatomical characteristics are used to classify organisms and infer evolutionary relationships.