The Estuary Investigations program is a 50-minute inquiry-based lesson that examines the different habitats within an estuary and the organisms found there. Students will learn about the importance of estuaries, the ever-changing physical stresses organisms are subjected to, and will work in small groups to sample and identify estuarine organisms and discover their adaptations to this unique environment.

The Oregon coast is made up of a series of rocky shores, sandy beaches, and estuaries, all of which are greatly affected by fluctuating tides. These areas are intertidal and are alternately inundated by seawater and exposed to air, wind, and dramatic changes in temperature and salinity. High tide floods these areas with cold, nutrient-laden seawater, bringing food to organisms that live there in the form of plankton and detritus. Low tides often expose these organisms to the dangers of predation and desiccation. Because of these harsh conditions, organisms have developed special adaptations that not only help them to survive but thrive in these environments. An adaptation is a physical or behavioral trait that helps a plant or animal survive in a specific environment or habitat.

Estuaries are environments that form at the mouth of rivers where they meet the sea. Rivers erode their banks as they travel across the land, carrying sediment that is then deposited when waters come in contact with the force of the ocean and river flows slow. The sediment in estuaries tends to be finer than that of sand beaches, consisting primarily of mud. As such, it can be difficult for organisms and water to move through and is often anoxic (devoid of oxygen). Organisms found here, including mud shrimp, polychaete worms, and cockles, create burrows in the mud and have specialized structures for obtaining oxygen and food below. Predators such as crabs, fish and birds often move in and out of the estuary with the tide, feeding on these burrowing organisms.

An estuary can be broken into different habitats. The Yaquina Bay Estuary has salt marsh areas that run along the shorelines and are composed of complex plant communities. There are also extensive mudflats that are exposed at low tide but loaded with burrowing species. Submerged seagrass beds provide critical habitat for juvenile marine animals and tidal channels to which many retreat when waiting for high tide to return.

Because of the nutrients carried by rainwater as it runs across the land and into rivers and the plankton brought in by the tide, estuaries tend to be highly productive areas. Phytoplankton, eelgrass beds, and salt marsh plants are all nourished by the influx of nutrients to this area and in turn, provide food for numerous other organisms in a complex food web system. 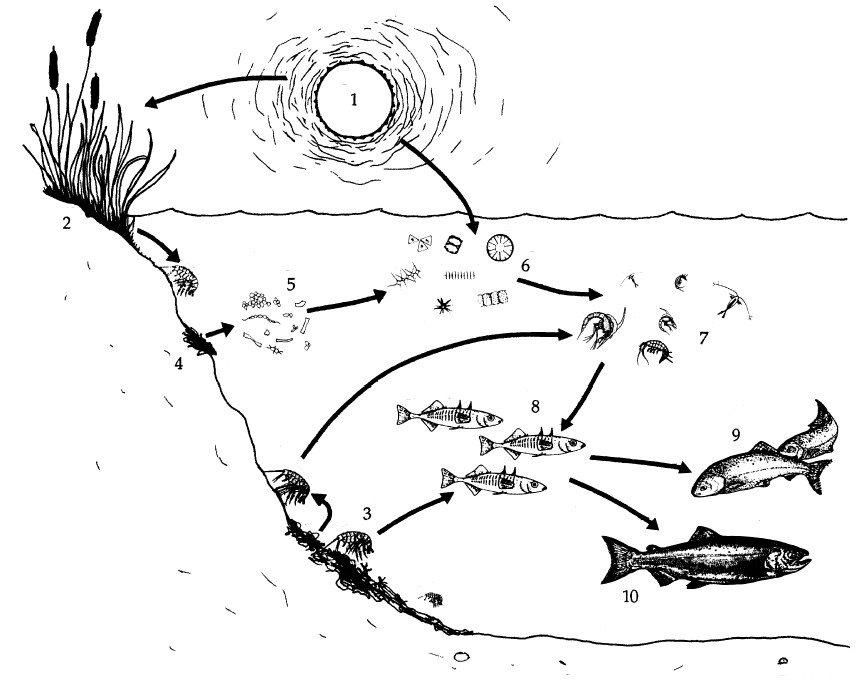 Because of their high productivity, estuaries are nursery grounds for numerous marine fish and crab species. Most of these species enter the estuary as larvae carried in with the tide, then remain as juveniles to take advantage of the habitat and food sources. Other species such as shorebirds and migrating waterfowl also utilize these areas as critical feeding grounds and rest areas. Because of the large number of organisms found there, estuaries often attract commercial and recreational fishermen and hunters who can have the ability to impact these areas through over-harvesting and habitat destruction.

There are a number of other ways humans impact estuaries and the many organisms that call them home. Because of our love of waterfront views and the need to access water for use in processing and for transportation, development in these areas continues to increase and has resulted in a loss of habitat in many estuaries. Contamination of these areas from point source and non-point source (from runoff and trash) pollution increases with human population growth and development. The introduction of invasive species has also become a huge problem in many of these areas, as the introduced species affect the growth and survival of native species through disease, parasitism and competition. 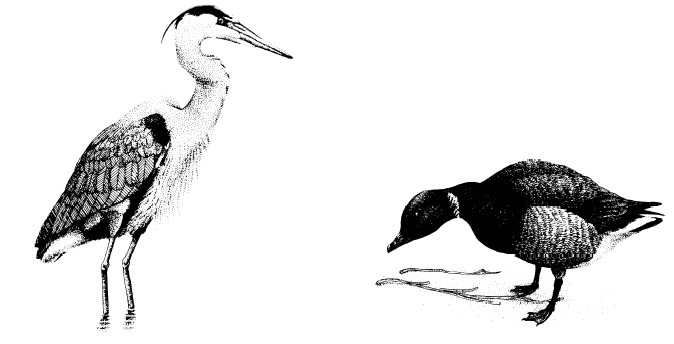 Related resources and curriculum focusing specifically on mudflat and eelgrass beds can be found at Padilla Bay National Estuarine Research Reserve in Washington.

How are these variables related?
Track changes over a week then look at the archived data to determine seasonal changes. What is responsible for daily fluctuations? Seasonal fluctuations? Have students predict what changes they will see in the future then revisit the site to see if their predictions were correct.

Take digital photos of the organisms encountered during your visit to the Yaquina Bay Estuary. Have students create ID guides for future students, labeling the organisms, identifying the exact location found in the estuary, and identifying adaptations each organism has to the environment.

Grade 1
1.1 Structure and Function: Living and non-living things have characteristics and properties.
1.1L.1 Compare and contrast characteristics among individuals within one plant or animal group.
1.2 Interaction and Change: Living and non-living things interact.
1.2L.1 Describe the basic needs of living things.
1.3 Scientific Inquiry: Science explores the natural world using evidence from observations.
1.3S.1 Identify and use tools to make careful observations and answer questions about the natural world.
1.3S.2 Record observations with pictures, numbers, or written statements.
1.3S.3 Describe why recording accurate observations is important in science.
1.4 Engineering Design: Engineering design is used to design and build things to meet a need.
1.4D.2 Demonstrate that designed structures have parts that work together to perform a function.
1.4D.3 Show how tools are used to complete tasks every day.

Grade 4
4.2 Interaction and Change: Living and non-living things undergo changes that involve force and energy.
4.2L.1 Describe the interactions of organisms and the environment where they live.
4.3 Scientific Inquiry: Scientific inquiry is a process of investigation through questioning, collecting, describing, and examining evidence to explain natural phenomena and artifacts.
4.3S.2 Summarize the results from a scientific investigation and use the results to respond to the question being tested.
4.4 Engineering Design: Engineering design is a process of using science principles to solve problems generated by needs and aspirations.
4.4D.3 Explain how the solution to one problem may create other problems.

Grade 5
5.1 Structure and Function: Living and non-living things are composed of related parts that function together to form systems.
5.1L.1 Explain that organisms are composed of parts that function together to form a living system.
5.2 Interaction and Change: Force, energy, matter, and organisms interact within living and nonliving systems.
5.2L.1 Explain the interdependence of plants, animals, and environment, and how adaptation influences survival.
5.3 Scientific Inquiry: Scientific inquiry is a process of investigation based on science principles and questioning, collecting, describing, and examining evidence to explain natural phenomena and artifacts.
5.3S.3 Explain the reasons why similar investigations may have different results.

Grade 6
6.2 Interaction and Change: The related parts within a system interact and change.
6.2L.2 Explain how individual organisms and populations in an ecosystem interact and how changes in populations are related to resources.
6.4 Engineering Design: Engineering design is a process of identifying needs, defining problems, developing solutions, and evaluating proposed solutions.
6.4D.3 Describe examples of how engineers have created inventions that address human needs and aspirations.

Grade 7
7.2 Interaction and Change: The components and processes within a system interact.
7.2L.2 Explain the processes by which plants and animals obtain energy and materials for growth and metabolism.
7.2E.4 Explain how landforms change over time at various rates in terms of constructive and destructive forces.
7.3 Scientific Inquiry: Scientific inquiry is the investigation of the natural world based on observations and science principles that includes proposing questions or hypotheses, designing procedures for questioning, collecting, analyzing, and interpreting multiple forms of accurate and relevant data to produce justifiable evidence-based explanations.
7.3S.2 Organize, display, and analyze relevant data, construct an evidence-based explanation of the results of an investigation, and communicate the conclusions including possible sources of error.
7.3S.3 Evaluate the validity of scientific explanations and conclusions based on the amount and quality of the evidence cited.

Grade 8
8.3 Scientific Inquiry: Scientific inquiry is the investigation of the natural world based on observations and science principles that includes proposing questions or hypotheses and designing procedures for questioning, collecting, analyzing, and interpreting multiple forms of accurate and relevant data to produce justifiable evidence-based explanations and new explorations.
8.3S.2 Organize, display, and analyze relevant data, construct an evidence-based explanation of the results of a scientific investigation, and communicate the conclusions including possible sources of error. Suggest new investigations based on analysis of results.
8.3S.3 Explain how scientific explanations and theories evolve as new information becomes available.

High School
H.2 Interaction and Change: The components in a system can interact in dynamic ways that may result in change. In systems, changes occur with a flow of energy and/or transfer of matter.
H.2L.2 Explain how ecosystems change in response to disturbances and interactions. Analyze the relationships among biotic and abiotic factors in ecosystems.
H.2E.4 Evaluate the impact of human activities on environmental quality and the sustainability of Earth systems. Describe how environmental factors influence resource management.
H.3 Scientific Inquiry: Scientific inquiry is the investigation of the natural world by a systematic process that includes proposing a testable question or hypothesis and developing procedures for questioning, collecting, analyzing, and interpreting multiple forms of accurate and relevant data to produce justifiable evidence-based explanations and new explorations.
H.3S.1 Based on observations and science principles, formulate a question or hypothesis that can be investigated through the collection and analysis of relevant information.
H.3S.2 Design and conduct a controlled experiment, field study, or other investigation to make systematic observations about the natural world, including the collection of sufficient and appropriate data.
H.3S.3 Analyze data and identify uncertainties. Draw a valid conclusion, explain how it is supported by the evidence, and communicate the findings of a scientific investigation.